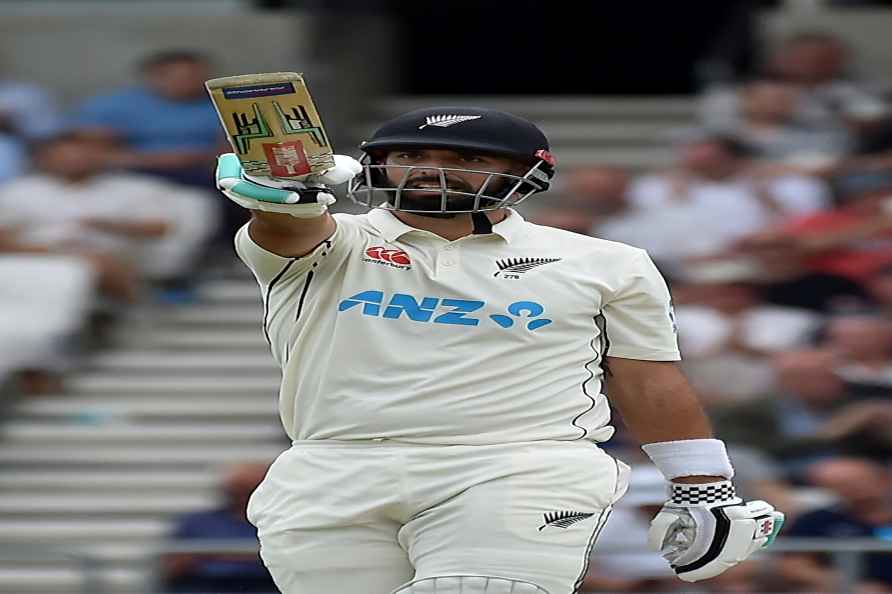 Leeds, June 25 : Jonny Bairstow and Jamie Overton shared a scintillating unbeaten 209-run partnership to rescue England from a precarious 55/6 on the second day of the third and final Test here on Friday. Bairstow was batting on 130 while Overton was unbeaten on 89 as England reached 264/6 at stumps on Day 2. New Zealand pacer Trent Boult rattled England with three early wickets and Neil Wagner claimed two as England got off to a disastrous start replying to New Zealand's first innings total of 329. With England, 2-0 up in the series but reeling on 55/6 in reply to the tourists' 329, Bairstow and Overton combined to produce a hugely entertaining partnership and leave the third Test very match in the balance after two days. It was Bairstow who led the charge for England, scoring at a-run-a-ball or better for much of his outstanding knock of 130* - a tenth Test century and his fourth already in what has been a brilliant 2022 to date for the 32-year-old. And at the other end, the debutant Overton looked every inch the all-rounder that England had heralded him as being when naming him in Test XI for the first time. The Surrey man ended play 11 runs short of a Test century on debut, and will resume on 89* with England 65 runs behind on 264/6 after just 49 overs, said a report on the ICC website. A memorable day began with New Zealand adding 104 runs to their overnight score, with the in-form Daryl Mitchell (109) leading the charge. Mitchell brought up his century to continue a fine individual series with the bat for the Kiwi and was ably supported by a quickfire 33 from Tim Southee to help the score past 300. Jack Leach removed both batters and picked up the final scalp of Neil Wagner to secure a five-wicket haul and finish with figures of 5/100. However, Trent Boult rattled the England top order to raise New Zealand's hopes. The brilliant Boult ripped through England's top order, dismissing Alex Lees (4), Ollie Pope (5) and Zak Crawley (6), all bowled, to put the home side in huge trouble. When Tim Southee had Joe Root caught behind for just five runs it looked like England were heading for a huge first-innings deficit. And things didn't get much better after tea when an extraordinarily-attacking 13-ball 18 from Ben Stokes came to an end when he charged Wagner and chipped a catch to Kane Williamson, with Ben Foakes departing for a duck just three balls later. At 55/6 and with the first of England's specialist bowlers at the crease it looked as if even the follow-on might have been an option for New Zealand on day two. But Bairstow and Overton had other ideas and put the hosts in a position from which they can think of taking the first innings lead. Brief scores: New Zealand 329 all out in 117.3 overs (Daryl Mitchell 109, Tom Blundell 55; Jack Leach 5/100, Stuart Broad 3/62) v England 264/6 in 40 overs (Jonny Bairstow 130 not out, Jamie Overton 89 not out; Trent boult 3/73, Neil Wagner 2/53). /IANS

Ireland men's to play England in four-day Test match at Lord's next year
[Indian fashion designer Neha Poorswani show a creation for 'Runway Reinveted', part of the 'We Are Made in Italy' collecting fashion event are shown

Parthiv Patel powers Gujarat Giants to second win in LLC
Lucknow, Sep 20 : Parthiv Patel proved he still retains his reputation of being a pocket-sized powerhouse as he smashed a 17-ball 34 on Monday to help

Another case of food poisoning in T'gana schools, 31 fall ill

Hyderabad, Sep 20 : In yet another case of food poisoning in government-run schools in Telangana, 31 students of a minority residential school in Kumaram Bheem Asifabad district have taken ill. […]

[**EDS: COMBO PHOTO** New Delhi: File photos of (L-R) Shashi Tharoor, Sonia Gandhi and Ashok Gehlot. After more than two decades, the Congress is likely to see a non-Gandhi contest for the post of its […]