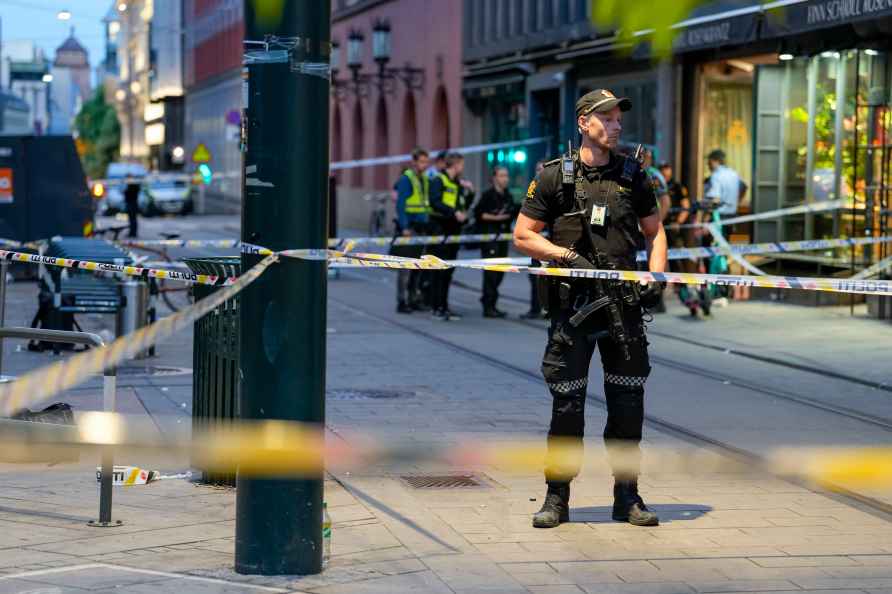 [Police stand guard at the site of a mass shooting in Oslo, early Saturday, June 25, 2022. A few people were killed and more than a dozen injured early Saturday in a mass shooting in Oslo, Norwegian police said, as the city was gearing up for an annual Pride parade. /PTI] Oslo, June 25 : Two people were killed and several others severely injured during a shooting at a nightclub in Oslo, police in the Norwegian capital said on Saturday. The police said suspected shooter has been arrested but did not immediately reveal the motive behind the shooting, reports Xinhua news agency. According to the BBC, there were reports of gunfire at the London Pub, a popular gay bar, as well as near the Herr Nilsen jazz club and a takeaway at about 1 a.m. The shooting comes as Oslo is due to hold its annual Pride parade later on Saturday. In response to the shooting, Justice Minister Emilie Enger Mehl said the incident had shaken the country, adding that: "Norway is a community of trust where everyone should feel safe outside on a Saturday night." No other details of the incident was immediately available. /IANS

As BJP prepares for upcoming Assembly polls, its top target is KCR

By Santosh Kumar Pathak New Delhi, Aug 13 : The Bharatiya Janata Party (BJP) is busy preparing for the upcoming Assembly elections in Gujarat and Himachal Pradesh to be held later this year, as well […]

Efforts to save Karam dam

Dhar: Madhya Pradesh Water Resources Minister Tulsiram Silawat conducts an aerial survey to take stock of the situation after a breach in a wall of the dam was reported, at Kothida in Dhar district, S […]

Will Congress be dented by AAP's growing presence in Gujarat?

By Haresh Jhala Gandhinagar, Aug 13 : This time there will be a triangular contest on many seats in the Gujarat assembly elections. After almost three decades a third force is emerging in the state […]