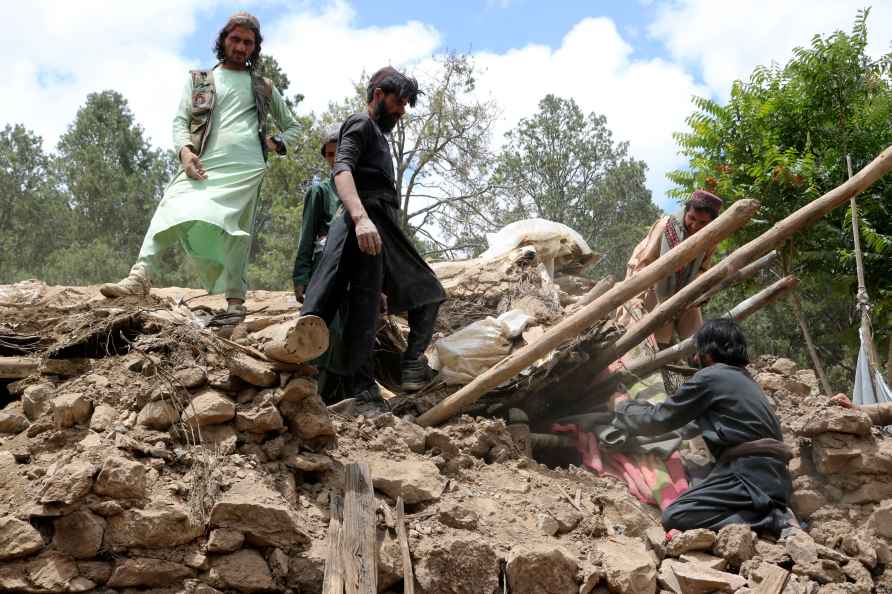 Kabul, June 22 : The toll from an earthquake that jolted Afghanistan on Wednesday has crossed 1,000, while more than 1,500 people were injured, an official said, adding the number of casualties might rise further. "More than 1,000 people were killed and 1,500 injured as a result of the earthquake and subsequent landslide in two districts of Gayan and Barmal of Paktika province," Mohammad Amin Haddifa, chairman of the provincial directorate of information and culture, told Xinhua news agency. In the neighbouring Khost province, at least 25 people were killed and 100 others wounded after more than 600 houses, mosques, and shops were destroyed by the quake, according to provincial officials. Hours after the quake, Acting Prime Minister Mullah Mohammad Hassan Akhund chaired an emergency cabinet meeting on Wednesday morning, the prime minister's office wrote on Twitter. Hassan Akhund also ordered a grant of 1 billion afghanis (more than $11.2 million) to assist the victims of the natural disaster. "The meeting has ordered all concerned agencies to rush to the spot immediately. Use all available resources to save the lives of the affected people and provide all necessary assistance," he said. The quake, with a magnitude of 5.9, jolted 44 km southwest of Khost. Gayan district was the worst-hit area in Paktika. The quake has destroyed and damaged scores of houses in the region and also caused land sliding in Paktika. The quake struck the mountainous areas, and the authorities have dispatched helicopters with life-saving equipment and medical personnel to the area, while medical and rescue teams were also on the way to the affected areas. /IANS