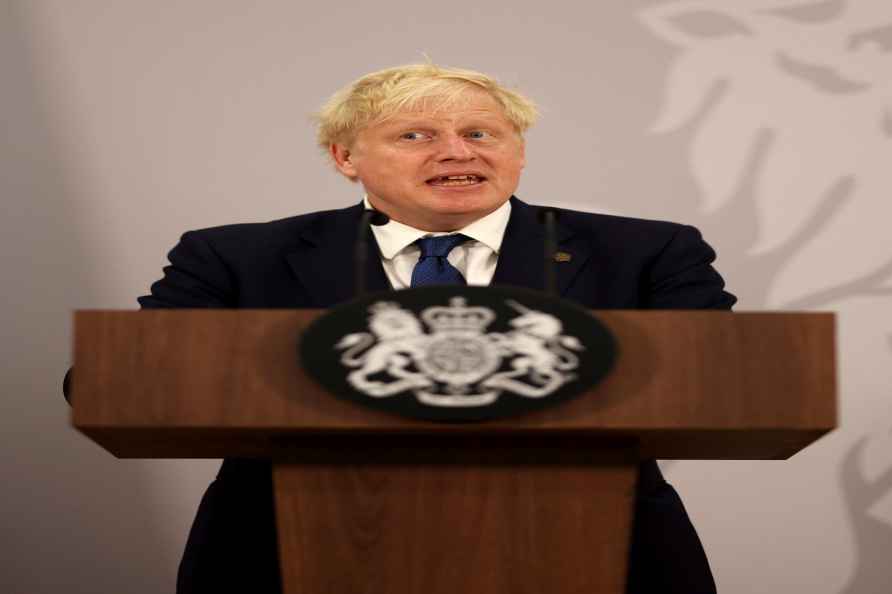 [British Prime Minister Boris Johnson speaks during a news conference at the Commonwealth Heads of Government Meeting, in Kigali, Rwanda Friday, June 24, 2022. Leaders of Commonwealth nations were meeting in Rwanda's capital Friday to tackle climate change, tropical diseases and other challenges deepened by the COVID-19 pandemic. /PTI] Kigali, June 24 : Heads of government of the Commonwealth nations along with business and civil society leaders committed to accelerating progress in the fight against malaria and non-communicable diseases (NTDs), with pledges towards intervention efforts. The commitment was made at the Kigali Summit on Malaria and Neglected Tropical Diseases, a side event of the Commonwealth leaders meeting in Rwanda's capital city Kigali on Thursday. Delegates at the summit hosted by the Rwandan government reaffirmed countries' commitment to end malaria and neglected tropical diseases, Xinhua news agency reported. "Incredible commitments were made on co-financing towards the fight against malaria; more than $2.1 billion of funding commitments were spotlighted through today's announcements by the Global Fund as domestic commitments made between 2021 and 2023," Rwandan Health Minister Daniel Ngamije told the summit. Malaria is a preventable, treatable disease but every year, malaria sickens more than 200 million people and kills more than 600,000, according to the World Health Organisation (WHO). Most of the victims are among young children in Africa, who are most vulnerable. Community ownership and behaviour change with youth at the center will help us to combat malaria and NTDs, said Tedros Adhanom Ghebreyesus, the WHO Director-General. He also mentioned the need to increase funding for malaria control programmes. The consequences of NTDs stretch beyond the health sector, greatly denting our economies, particularly African countries; the suffering of our people is unnecessary, said Botswana President Mokgweetsi Masisi. Among the highlights, Melinda Gates, co-chair of the Gates Foundation said that 15 years after countries called for the eradication of malaria, the Gates Foundation is stepping up its commitment by pledging $140 million over four years to support African institutions fighting malaria. "We're asking leaders to increase commitments to the Global Fund. Reaching the $18 billion target will reduce malaria cases by two-thirds and eliminate the disease from six more countries by 2026, "she added. Prince Charles of Wales said human health and planetary health are fundamentally connected and climate change is increasing the length of the malaria transition season in many parts of the globe. Ren Minghui, Assistant Director-General for Communicable and Non-communicable Diseases at the WHO outlined four priorities to keep countries on track toward 2030 Malaria and NTDs elimination goals. These include integration of the diseases into primary healthcare, innovation and development of new response and control tools, increasing domestic investments as well as adaptation of Malaria and NTDs interventions to realities of countries that have the highest burden, especially Africa and Asia. The summit was one of a series of events taking place as part of the 26th Commonwealth Heads of Government Meeting which runs from June 20 to 25. Heads of governments from 54 Commonwealth countries are discussing ways how the contemporary Commonwealth can transform societies. /IANS

PM Modi greets citizens on Independence Day
[**EDS: SCREENGRAB FROM YOUTUBE** New Delhi: Prime Minister Narendra Modi addresses the nation from the ramparts of the Red Fort on the occasion of th

By Shashi Bhushan New Delhi, Aug 14 : The BJP central leadership believes that the change of leadership in the party's Chhattisgarh unit will end the infighting and factionalism ahead of next year' […]

Everyone has access to free healthcare in Delhi; providing good healthcare to people is not 'free ki revdi': Arvind Kejriwal.

Everyone has access to free healthcare in Delhi; providing good healthcare to people is not 'free ki revdi': Arvind Kejriwal. […]

If we provide good education to our children, poverty can be eradicated in one generation: Arvind Kejriwal.

If we provide good education to our children, poverty can be eradicated in one generation: Arvind Kejriwal. […]