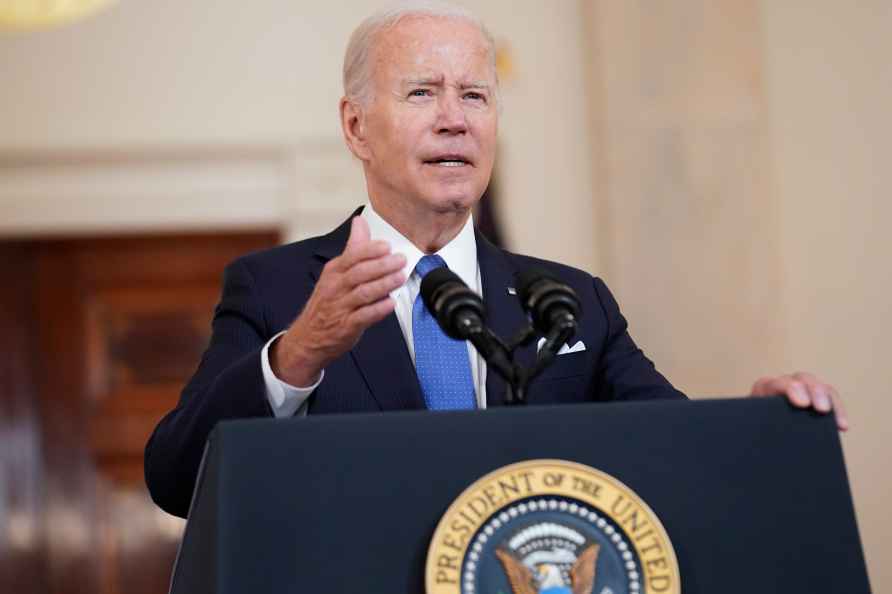 [President Joe Biden speaks at the White House in Washington, Friday, June 24, 2022, after the Supreme Court overturned Roe v. Wade. /PTI] By Yashwant Raj Washington, June 24 : The US Supreme Court on Friday overturned the fundamental right to abortion granted by an earlier order in the Roe v. Wade case nearly 50 years ago. The 5-4 order of the overwhelmingly conservative nine-justice bench is expected to change American social life as it exists now. The court has left abortion rights to be determined individually by the 50 states. Sixteen states and the District of Columbia have state laws protecting abortion and will remain unaffected by the Supreme Court order. About 17 states do not have any explicit laws either upholding abortion rights or prohibiting abortion, according to one study and nearly half of all 50 states are expected to make abortion difficult or impossible. Women from states with a ban or restrictions may be able, however, to travel to other states for the procedure. "Roe was egregiously wrong from the start. Its reasoning was exceptionally weak, and the decision has had damaging consequences. And far from bringing about a national settlement of the abortion issue, Roe and Casey (a 1992 case in which the Roe v. Wade case was upheld) have inflamed debate and deepened division," Justice Samuel A. Alito wrote for the majority opinion. "It is time to heed the Constitution and return the issue of abortion to the people's elected representatives." The order as delivered was very similar to a leaked copy of Justice Alito's opinion in May and was widely anticipated by the overwhelmingly conservative non-justice bench with the addition of three conservative justices -- Neil Gorsuch, Brett Kavanaugh and Amy Coney Barrett. Justices Alito and Clarence Thomas and Chief Justice John Roberts are the other three conservatives. The three liberal justices are Stephen Breyer, Sonia Sotomayor and Elena Kagan. Nancy Pelosi, the Democratic Speaker of the House of Representatives, slammed the court order. "Today, the Republican-controlled Supreme Court has achieved the GOP's dark and extreme goal of ripping away women's right to make their own reproductive health decisions. Because of Donald Trump, Mitch McConnell (top Republican senator), the Republican Party and their supermajority on the Supreme Court, American women today have less freedom than their mothers," she said, adding: "This cruel ruling is outrageous and heart-wrenching. But make no mistake: the rights of women and all Americans are on the ballot this November." The court issued the order in connection with a Mississippi law that prohibits abortion after 15 weeks of conception. The law had not been implemented because it was ruled violative of the Supreme Court's order in the Roe v. Wade in 1973, that made abortion a constitutional right. Chief Justice joined his other conservative colleagues to uphold the Mississippi law -- Dobbs v. Jackson Women's Health -- 6-3; but he joined the liberal to oppose his conservative colleagues decision to overturn the Roe v. Wade order in a 5-4 order. Abortion has been a politically emotive issues, specially with Republican who have had it as a key election plank for decades. The American public, however, stands largely supportive of abortion rights -- 61 per cent favour abortion in all or most cases while 37 per cent want it be made illegal in all or most cases, according to Pew Research Center. About three-quarters of White evangelical Protestants (74 per cent) think abortion should be illegal in all or most cases, the center found, while 84 per cent of religiously unaffiliated Americans say abortion should be legal in all or most cases, as do 66 per cent of Black Protestants, 60 per cent of White Protestants who are not evangelical, and 56 per cent of Catholics. Abortion rights supporters are girding up for a long battle to restore these constitutional rights. But with the judicial route now blocked for a time with the brutal conservative majority on the Supreme Court bench, they are looking at legislating a law to codify it. Senate Majority leader Chuck Schumer has scheduled a vote on a prospective law but he does not have the support of 60 members -- essentially, 10 Republicans -- and is unlikely to get anywhere. Democrats, who overwhelmingly favour abortion rights, cannot enact a protective law unless they expanded control of both chambers, which they don't have now. But restoration of these rights could become a key election plank and a rallying point for liberals, starting with the mid-term polls due in November. /IANS