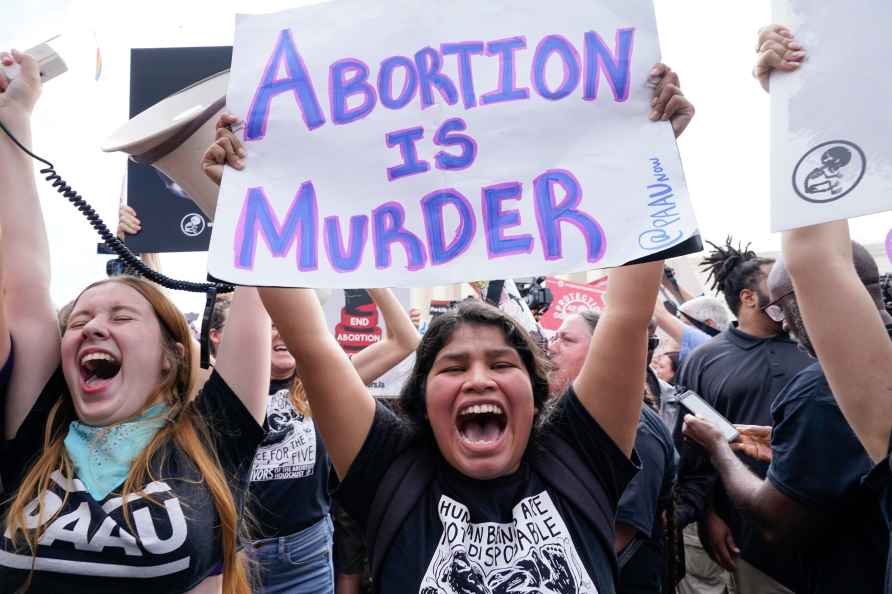 [People celebrate outside the Supreme Court, Friday, June 24, 2022, in Washington. The Supreme Court has ended constitutional protections for abortion that had been in place nearly 50 years, a decision by its conservative majority to overturn the court's landmark abortion cases. /PTI] Washington, June 24 : The US Supreme Court struck down a New York state law that limits gun-carrying in public. The 6-3 ruling, on Thursday which divided the court along the usual ideological lines, came as the US is still reeling from a spate of mass shootings over the past few weeks, including one in Uvalde, Texas, that left 19 children and two teachers dead a month ago. The State of New York makes it a crime to possess a firearm without a license, whether inside or outside the home, Xinhua news agency reported. An individual who wants to carry a firearm outside his home may obtain an unrestricted license to "have and carry" a concealed "pistol or revolver" if he can prove that "proper cause exists" for doing so, according to the law. "Because the State of New York issues public-carry licenses only when an applicant demonstrates a special need for self-defense, we conclude that the state's licensing regime violates the Constitution," Conservative Justice Clarence Thomas wrote in the ruling. In a dissent, liberal Justice Stephen Breyer wrote that the court's ruling "severely burdens states' efforts" to curb gun violence. "The primary difference between the court's view and mine is that I believe the Amendment allows states to take account of the serious problems posed by gun violence," Breyer argued. "I fear that the court's interpretation ignores these significant dangers and leaves states without the ability to address them." New York Governor Kathy Hochul accused the Supreme Court of recklessness in striking down the state law "at a moment of national reckoning on gun violence". "In response to this ruling, we are closely reviewing our options -- including calling a special session of the legislature," Hochul added. The ruling could affect the ability of state and local governments to impose a wide variety of firearms regulations, legal analysts said. All states allow carrying concealed guns in public, although many require state-issued permits. CNN chief legal analyst Jeffrey Toobin said he believes the decision from the Supreme Court "expands the Second Amendment right" in the US. "What the Conservatives on the Supreme Court are saying is, "we want the Second Amendment to be a first-class right like the First Amendment. And we want to be able to carry guns anywhere anytime without any sort of regulation by the government -- without background checks, without restrictions on where you can take a weapon, without restrictions on how you can carry a weapon". Now, they haven't gone that far yet. But they are clearly moving in that direction," Toobin added. The US Supreme Court released three other opinions on Thursday but again prolonged the wait for a ruling on abortion rights. A draft majority opinion was leaked from the court last month, which indicates that it is leaning toward overturning Roe v. Wade, a landmark decision establishing a constitutional right to abortion in the US, made by the US high court in 1973. "Roe was egregiously wrong from the start," Conservative Justice Samuel Alito wrote in the draft majority opinion, a copy of which was obtained and published by POLITICO. "We hold that Roe and Casey must be overruled," the Conservative argued. "It is time to heed the Constitution and return the issue of abortion to the people's elected representatives." Casey refers to a 1992 Supreme Court decision -- Planned Parenthood v. Casey -- which largely upheld the women's abortion rights guaranteed under Roe v. Wade. Protesters on both sides of the abortion rights debate gathered outside the Supreme Court on Capitol Hill on Thursday with police presence. /IANS