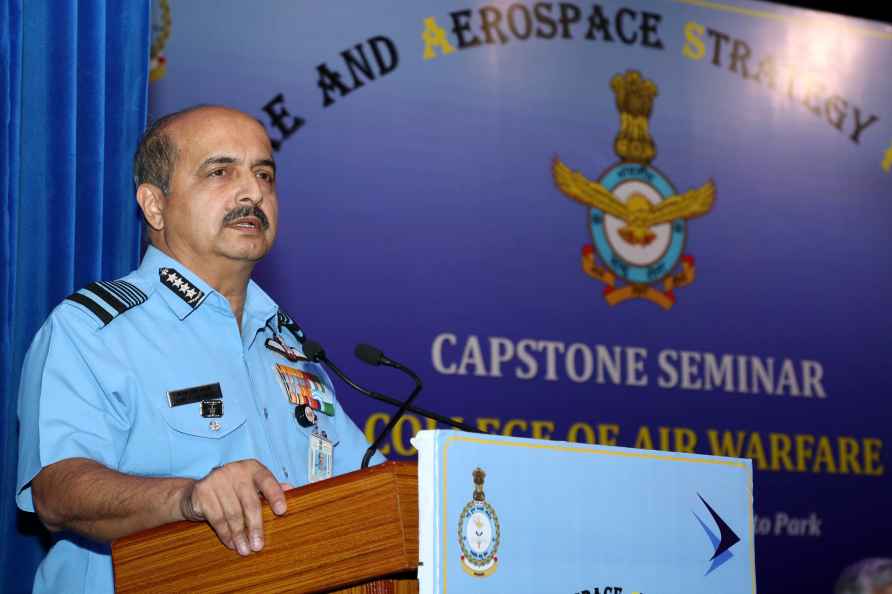 [**EDS: HANDOUT PHOTO MADE AVAILABLE FROM IAF PRO ON FRIDAY, JUNE 24, 2022** New Delhi: Chief of the Air Staff Air Chief Marshal VR Chaudhari speaks during Capstone Seminar, marking the culmination of the first Warfare & Aerospace Strategy Program (WASP), at Air Force Auditorium, in New Delhi. ( /PTI] New Delhi, June 24 : Indian Air Force on Friday started the registration process for recruitment under the Agnipath scheme. In a notification, the IAF gave important dates for interested candidates to apply under the scheme. The registration process which began on Friday (June 24) will continue till July 5. The online examination will be held on July 24. The candidates will be selected on the basis of online test, physical fitness test (PFT), adaptability test-I, adaptability test-II and medical examination. The age group must be between 17.5 years to 21 years. "Candidates born between 29 December 1999 and 29 June 2005 (both days inclusive) are eligible to apply. In case, a candidate clears all the stages of the Selection Procedure, then the upper age limit as on date of enrolment is 23 years," said the IAF notification. "Agniveervayu will be enrolled in the Indian Air Force under Air Force Act 1950 for a period of four years. Agniveervayu would form a distinct rank in the Indian Air Force, different from any other existing ranks. Indian Air Force is not obliged to retain Agniveervayu beyond the engagement period of four years," said the IAF notification. The notification added further that the Agniveervayu will not have any right to be selected for further enrolment into the Indian Air Force. Selection of the Agniveervayu for further enrolment, if any, shall be at the discretion of the Indian Air Force, it added. The first batch of Agniveervayu would be enrolled by December and training would commence by December 30. "Registration process for the first batch of Agniveers will start from June 24. The Phase 1 online examination process would start on July 24. The first batch would be enrolled by December and training would commence by December 30," Air Marshal S.K. Jha had said in the tri-services press briefing held on June 19. /IANS