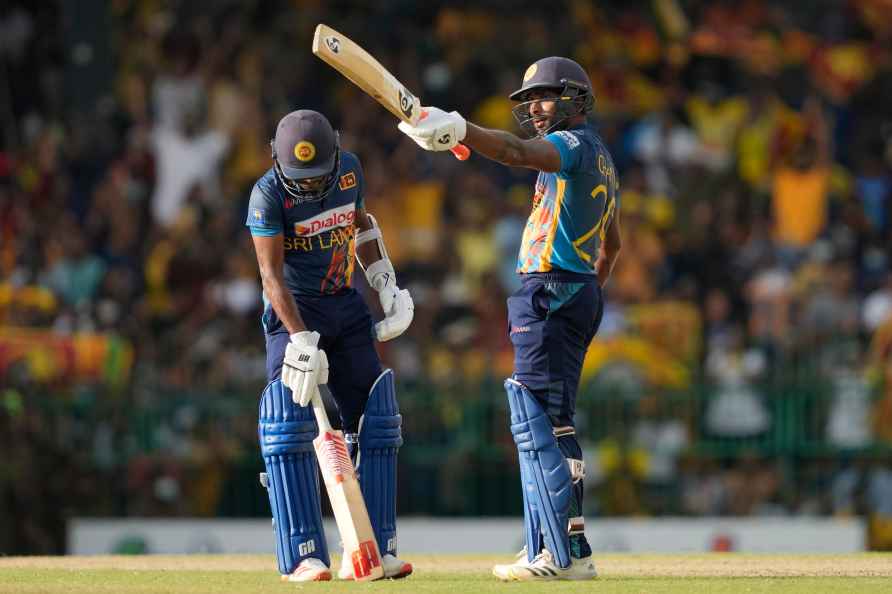 [Sri Lanka's Chamika Karunaratne, right, celebrates scoring a half century as batting partner Pramod Madushan watches during the fifth one-day international cricket match between Australia and Sri Lanka in Colombo, Sri Lanka, Friday, June 24, 2022. /PTI] Colombo, June 24 : Sri Lanka will look to go all out for victory in the fifth and final ODI against a severely-depleted Australia side, given the psychological edge it will provide the hosts ahead of the two-Test series beginning in Galle on June 29. After taking a 3-1 lead in the five-match ODI series, Dasun Shanaka's side will likely not slow down in the fifth match of the series at the R. Premadasa Stadium on Friday, and will look to hand the tourists another blow ahead of the World Test Championship series. Not only are the tourists down on players after a spate of injuries, but the 43 overs of spin faced in the fourth ODI exposed the shortcomings of a batting line-up craving for pace. Kept under wraps by a stifling slow-ball pack, the Aussies were suffocated by an aggressive Shanaka, who pressed on with attacking fields, laced with catching men. The biggest gain from the series is the emergence of the young Sri Lanka crop looking to put their nation's cricket back in the limelight. In the midst of the troubling economic crisis in Sri Lanka, their cricketers, many trying to find a footing in the national side, have stood tall. The 24-year-old Charith Asalanka has continued to rise, not only in the eyes of his peers, but also on the ODI batting rankings. The left-hander averages over 50 in the series, alongside fellow 24-year-old Pathum Nissanka. Both can lay claim to match-winning hundreds in the series, while on the bowling side, U-19 World Cup star Dunith Wellalage has joined Wanindu Hasaranga in tying the Aussies up in knots, while also contributing with the bat. The pair has taken 11 wickets between them, with Jeffrey Vandersay, Dhananjaya de Silva and Chamika Karunaratne all claiming five apiece. "I was very happy with the score we were able to put on (to win the match and series). Not only for me, my teammates, Sri Lanka cricket, the whole country, this is much needed at the moment. I think this should be celebrated by the whole of Sri Lanka," captain Dasun Shanaka was quoted as saying by ICC ahead of the final ODI. "The series has gone the same way the previous few games have. Any time we look like getting a big partnership and then kicking on we just lose a wicket. We know how hard it is to start in these conditions against good spin and they made the most of the small opportunities we gave them," a disappointed Australia skipper Aaron Finch had said after losing the series. /IANS