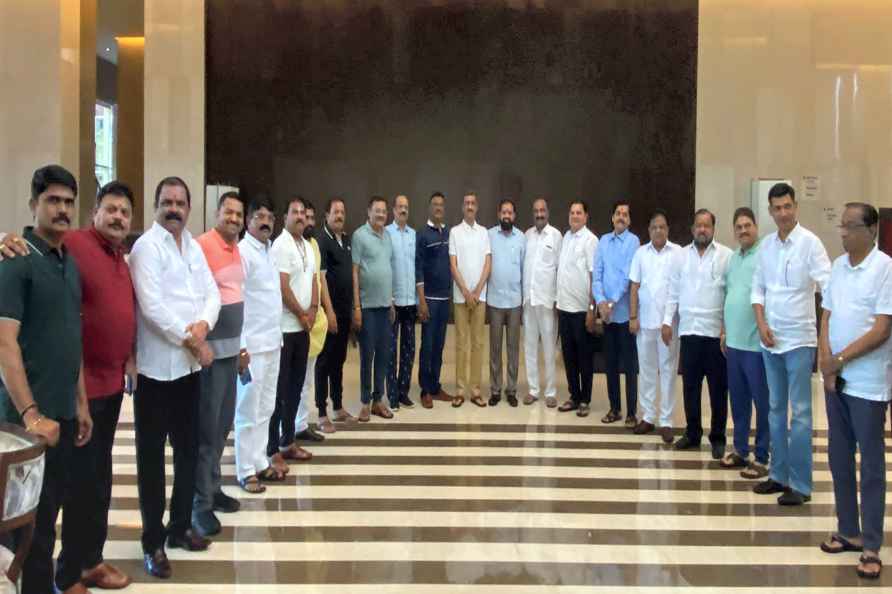 [Guwahati: Shiv Sena leader Eknath Shinde along with other rebel Shiv Sena MLAs at a hotel in Guwahati, Friday, June 24, 2022. ( /PTI] Mumbai, June 24 : As the Maharashtra political crisis continued for the fourth day, the rebel group led by Minister Eknath Shinde has submitted a list of his 37 MLAs to Deputy Speaker of Legislative Assembly Narhari Zirwal. The list, submitted late on Thursday, has also attached two resolutions stating -- Shinde continues to be the chief of Shiv Sena Legislative Party, and MLA Bharat Gogavale has been appointed new Chief Whip. The group claimed the support of 40 MLAs plus a dozen independents and smaller parties on Friday (June 24). The development came shoulder-to-shoulder with the Shiv Sena in Mumbai submitting a list of 12 MLAs, including Shinde, to Zirwal, demanding their disqualification late on Wednesday. Party MP Arvind Sawant said that the disqualification has been sought for flouting the Sena's Whip to attend a meeting of party legislators held on Wednesday. Those who did not attend that meeting included: Eknath Shinde, Tanaji Sawant, Prakash Surve, Sandipan Bhumre, Bharat Gogavale, Balaji Kinikar, Anil Babar, Lata Sonwane, Yamini Jadhav, Sanjay Shirsat, Mahesh Shinde and Abdul Sattar. The development came after the party on Tuesday removed Shinde as the Shiv Sena Legislative Party Leader and replaced him with Ajay Chaudhri, which the Deputy Speaker has accepted, but the rebels group has cried foul. Dismissing the Sena move, Shinde said in Guwahati on Friday that the move was 'illegal' and intended to scare the legislators. "We are not frightened by all this. We know what they are doing and we also are aware of the laws and procedures... Let them send any number of letters or notices, we are not bothered," declared Shinde, speaking to the media. Sena MP and Chief Spokesperson Sanjay Raut said on Friday that now the legal battle has begun with the plea to the Deputy Speaker Zirwal to disqualify the 12 legislators as democracy runs on majority figures "which can change anytime". "So far, the support claimed by the rebels is only on paper... They have not yet come to Mumbai and the numbers will change after they return... Those who have gone will have to repent," Raut cautioned. Meanwhile, Shinde is taking a meeting of his group in the Guwahati hotel where they have pitched a tent, with more Sena legislators trickling in and unconfirmed reports of around four Sena MPs also jumping into his boat. In Mumbai, the ruling Maha Vikas Aghadi allies Nationalist Congress Party-Congress have thrown their full weight behind Chief Minister Uddhav Thackeray and help him fight the crisis till the end. Earlier, in a bid to mollify the rebels, Thackeray offered to quit as Chief Minister and also as party chief, and on Thursday (June 23) expressed willingness to leave the MVA provided the mutineers returned to Mumbai "in 24 hours" (by Friday evening) to hammer out their differences with the party leadership - but the Shinde group has spurned the overtures. /IANS

Three IIT Varanasi students among 7 killed in Himachal accident
[Kullu: An injured passenger undergoes treatment at a hospital, after a tempo traveller fell into a gorge on Sunday evening, in Himachal Pradesh's Kul

New Delhi: A man rows his improvised boat near the scale at the Yamuna River, in New Delhi, Monday, Sept. 26, 2022. The water level in the Yamuna is expected to rise in two days owing to rains in catc […]

Kolkata: Cricketer Jhulan Goswami being welcomed as she arrives at the NSCBI Airport after playing her farewell match in international cricket at Lord?s, in Kolkata, Monday, Sept. 26, 2022. ( /PTI […]