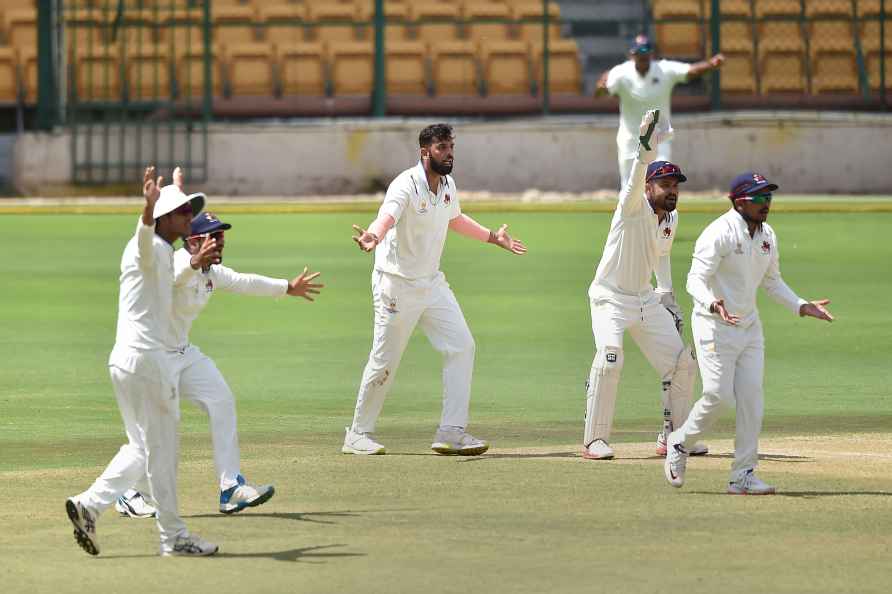 [Bengaluru: Mumbai players appeal during the third day of the Ranji trophy final cricket match between Mumbai and Madhya Pradesh, at M Chinnaswamy Stadium in Bengaluru, Friday, June 24, 2022. ( /PTI] Bengaluru, June 24 : Madhya Pradesh's dominance over Mumbai on day three of the Ranji Trophy final at the M. Chinnaswamy Stadium continued as Shubham Sharma slammed his fourth century of the season, joining Yash Dubey in carrying the side to 301/2 in 98 overs at tea, with just 73 runs away from taking the first-innings lead. Though Sharma got out for 116, Dubey continues to be unbeaten at 119 with Rajat Patidar giving him company, unconquered at 27. If Dubey got his century in the first session on Friday, it was Sharma's turn to get to his three-figure score. He began by timing a drive past mid-off off Mohit Awasthi and an over later after the second new ball was taken by Mumbai, Sharma reached his century with a stunning cover drive off Tushar Deshpande, also raising the 200-run partnership between him and Dubey. He also had luck on his side, when outer edge evaded the slip cordon twice, increasing Mumbai's troubles on day three. Mumbai almost had Sharma out when the batter reached out to defend but was beaten on outer edge. But with the umpire hearing no noise of the edge, the appeal was struck down. The ploy of making Sharma reach out forward and beat him on the outer edge worked on the very next ball as the batter tried to reach out again outside the off-stump, only to give a healthy nick behind to keeper Hardik Tamore off pacer Mohit Awasthi, ending a mammoth 222-run stand which lasted for 73.1 overs. Patidar walked out and smashed five boundaries, with chants of his IPL franchise 'RCB, RCB' going around the ground, clearing his intentions of attacking the Mumbai bowlers from the word go. Earlier, Madhya Pradesh got 105 runs in the first session without losing any wicket. The day began with Dubey opening the face of the bat late to get a boundary past gully. With the ball coming nicely on to the bat, Sharma made full use of it, dispatching Deshpande for boundaries through cover drive and square drive. Dubey reached his fifty with a brace through fine leg off Awasthi while Sharma reached his half-century with a single through square leg off Deshpande. With the duo collecting boundaries and rotating strike by running well between the wickets, Mumbai's troubles didn't have any end point as the pitch didn't give them much assistance. Moreover, with a dropped chance of Sharma by Armaan Jaffer at short cover, a run-out opportunity gone and three lbw appeals struck down, Mumbai's troubles weren't just stopping. Also, with not much turn available for left-arm spinner Shams Mulani, Sharma and Dubey used their feet well to take runs off him, with the former lofting through the line over the bowler's head for a six. Towards the end of the first session, Dubey accelerated to get boundaries off Mulani and Tanush Kotian through mid-wicket and followed it up with a sweep through fine leg off the latter to get a century in the Ranji Trophy final. He brought out the cancel-all-noise celebration, first brought out by KL Rahul, which was applauded by his team-mates in the dugout before lunch was called. Brief Scores: Mumbai 374 all out in 127.4 overs (Sarfaraz Khan 134; Gaurav Yadav 4/106) lead Madhya Pradesh 301/2 in 98 overs (Yash Dubey 119 not out, Shubham Sharma 116; Mohit Awasthi 1/44, Tushar Deshpande 1/73) by 73 runs. /IANS