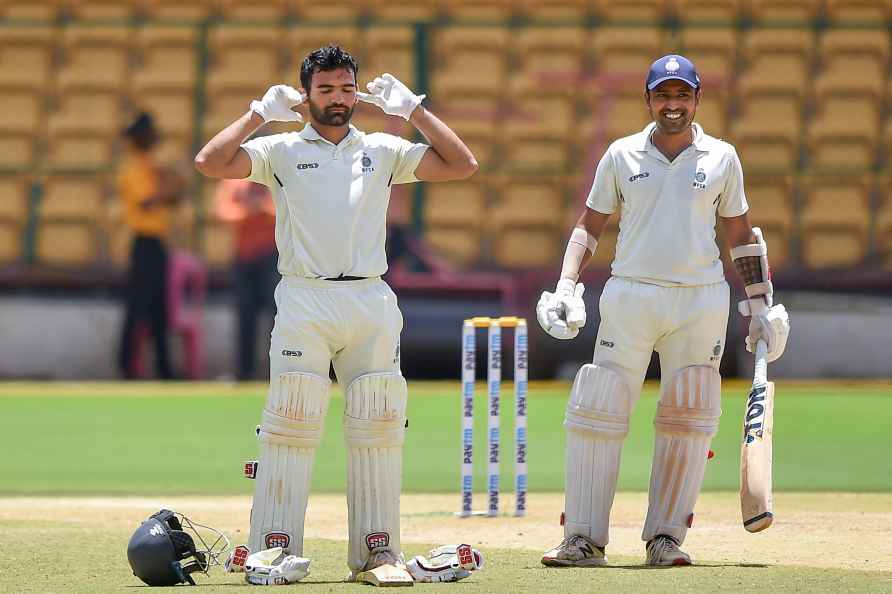 [Bengaluru: Madhya Pradesh batsman Yash Dubey (L) celebrates his century during the third day of the Ranji Trophy final cricket match between Mumbai and Madhya Pradesh at M Chinnaswamy Stadium, in Bengaluru, Friday, June 24, 2022. ( /PTI] Bengaluru, June 24 : Yash Dubey slammed his second century of the ongoing season as Madhya Pradesh dominated the first session on day three of the Ranji Trophy final at the M. Chinnaswamy Stadium on Friday. At lunch, Madhya Pradesh are 228/1 in 75 overs, trailing Mumbai by 146 runs, with Dubey unbeaten at 101, laced with 12 boundaries and Shubham Sharma giving him company, unconquered on 88 as the duo's stand for the second wicket swelled to 181. Resuming from 123/1 in 41 overs, Madhya Pradesh got 105 runs in the first session without losing any wicket. The day began with Yash Dubey opening the ace of the bat late to get a boundary past gully. With the ball coming nicely on to the bat, Shubham Sharma made full use of it, dispatching Tushar Deshpande for boundaries through cover drive and square drive. Dubey reached his fifty with a brace through fine leg off Awasthi while Sharma reached his half-century with a single through square leg off Deshpande. With the duo collecting boundaries and rotating strike by running well between the wickets, Mumbai's troubles didn't have any end point as the pitch didn't give them much assistance. Moreover, with a dropped chance at short cover, a run-out opportunity gone and three lbw appeals struck down, Mumbai's troubles weren't just stopping. Also, with not much turn available for left-arm spinner Shams Mulani, Sharma and Dubey used their feet well to take runs off him, with the former lofting through the line over the bowler's head for a six. Towards the end of the first session, Dubey accelerated to get boundaries off Mulani and Tanush Kotian through mid-wicket and followed it up with a sweep through fine leg off the latter to get a century in the Ranji Trophy final. He brought out the cancel-all-noise celebration, first brought out by KL Rahul, which was applauded by his team-mates in the dugout before lunch was called. Brief Scores: Mumbai 374 all out in 127.4 overs (Sarfaraz Khan 134; Gaurav Yadav 4/106) lead Madhya Pradesh 228/1 in 75 overs (Yash Dubey 101 not out, Shubham Sharma 88 not out; Tushar Deshpande 1/46) by 146 runs. /IANS

New Delhi, Aug 11 : The National Green Tribunal has agreed to hear a plea related to the unscientific disposal of bodies on the bank of the Ganga River causing huge pollution in the river. "The […]

New Delhi: Defence Minister Rajnath Singh with sportspersons from the Armed Forces who participated in Commonwealth Games 2022 during a felicitation ceremony, in New Delhi , Friday, Aug. 12, 2022. ( / […]

Chennai, Aug 11 : Security at the US Consulate in Chennai and a Jewish settlement in Dindigul has been intensified on an alert by central intelligence agencies. This follows the killing of Al Qa […]