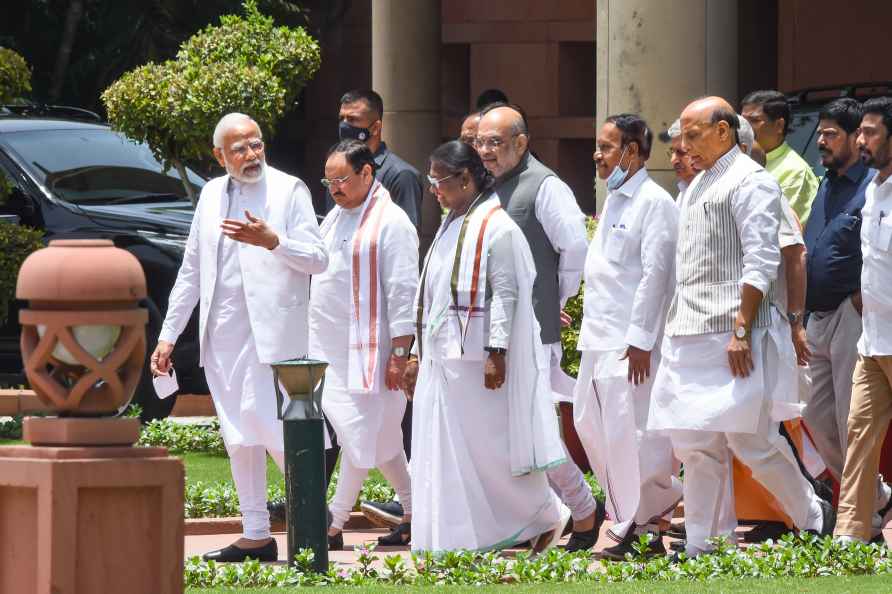 [New Delhi: NDA's candidate Droupadi Murmu, accompanied by Prime Minister Narendra Modi, Union Ministers Rajnath Singh, Amit Shah, BJP President J P Nadda and other dignitaries, walks towards Parliament House to file her nomination papers for presidential election, in New Delhi, Friday, June 24, 2022. ( /PTI] Hyderabad, June 24 : Hyderabad Police were busy making elaborate security arrangements for the July 2-3 national executive of the BJP and the public meeting to be attended by Prime Minister Narendra Modi and party's top leadership. Union Home Minister Amit Shah, several central ministers, state chief ministers, BJP national president J.P. Nadda and other top leaders will attend the national executive to be held at the Hyderabad International Convention Centre (HICC) in Hitec City. After the end of the national executive on July 3, the Prime Minister and others will address a public meeting to be organised by the BJP at Parade Grounds in Secunderabad. Hyderabad Police Commissioner C.V. Anand said the city police will make ample deployment of forces. Quick Response Teams will be pressed into service and additional reinforcements have also been put on standby. "Anti-sabotage precautions along with access control constitute the cornerstone of any security arrangement for the protection of VVIPs. Law & order, traffic officials were instructed to make all security plans in strict adherence to the SPG's Blue Book," said Anand. Deployment of snipers, anti-sabotage checks, roof-top watch, mufti parties, route map, trial runs and multi-layer security arrangements are being made in the city limits. Only valid pass holders will be allowed to participate in the public meeting and all the attendees will be frisked. There will be elaborate measures in place to deal with any spontaneous protests. The commissioner held a coordination meeting with senior police officers, Greater Hyderabad Municipal Corporation (GHMC), Telangana State Southern Power Distribution Company Limited (TSSPDCL), Roads and Buildings (R&B),Fire services, army officials and the representatives of BJP to reviewA security arrangements. The meeting discussed details of the PM's visit, his arrival, stay, attendance and departure and contingency plans in case of emergencies. Anand advised the BJP representatives to set up coordination committees to liaison with the officials of all departments, SPG and asked them not to make any last minute changes in the programme. The traffic branch pointed out the need for the Cantonment officials to allot adequate parking grounds for the vehicles carrying public from various districts of Telangana for the public meeting. The TSCPDCL asked the BJP leadership to organise sufficient generators The Medical and Health Department has also been asked to position specialist medical teams, ambulances along with equipment at the venues. To ensure Covid-19 protocols,all the pass holders will undergo RT-PCR tests before the scheduled programme. It has been decided to nominate one senior official from each department to quickly address any issue from the control center that would be setup at the venue. /IANS

President Murmu in a meeting with Union Ministers

On Mahesh Babu's b'day 'Pokiri' funds to be used for children's education, surgeries

Chennai, Aug 4 : Fans of actor Mahesh Babu have organised special screenings of the actor's superhit film 'Pokiri' to be held all over the world on his birthday on August 9. The proceeds from su […]

[India's Saurav Ghosal celebrates victory in the Men's Singles, Bronze Medal Squash Match between India and England at the University of Birmingham Hockey and Squash Centre on day six of the 2022 Comm […]