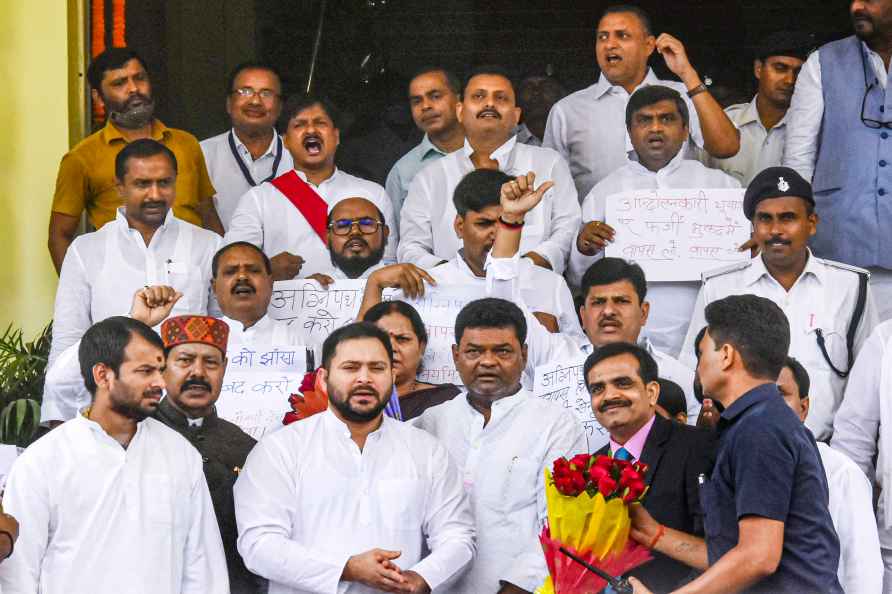 [Patna: RJD leader Tejashwi Yadav along with party legislators stages a protest over the Agnipath Scheme on the first day of the Monsoon session of the Assembly, in Patna, Friday, June 24, 2022. ( /PTI] Patna, June 24 : Bihar BJP MLA Hari Bhushan Thakur on Friday lodged a police complaint regarding death threat from an unidentified caller. Thakur, who is currently in the state capital for the monsoon session of the Assembly, said that at 10.47 p.m on Thursday night, he got a call from an unidentified person who warned him to refrain from making provocative speeches against a particular community or face death. "We have reported the matter to local police station and demanded that the administration take strict action against the accused," Thakur said. The MLA from Bipsi Assembly constituency in Madhubani district is considered a Hinduwadi hardliner known for his fiery speeches and statements against a particular community. "Those issuing life threats are cowards as they are confronting us to settle the scores," Thakur said. Due to his Hindu hardliner image, the BJP provided Y-category security to him along with nine other leaders during the Agnipath protest. /IANS

Despite AAP's Himachal foray, state headed for a bipolar election

Vindu Dara Singh on Raju Srivastava: He made 'Bigg Boss 3' journey much easier

New Delhi, Aug 13 : As the country is praying for the early recovery of comedian Raju Srivastava, who was hospitalised following a heart attack, his friend and actor Vindu Dara Singh recalls the time […]

UP Police's Tiranga Yatra in Lucknow