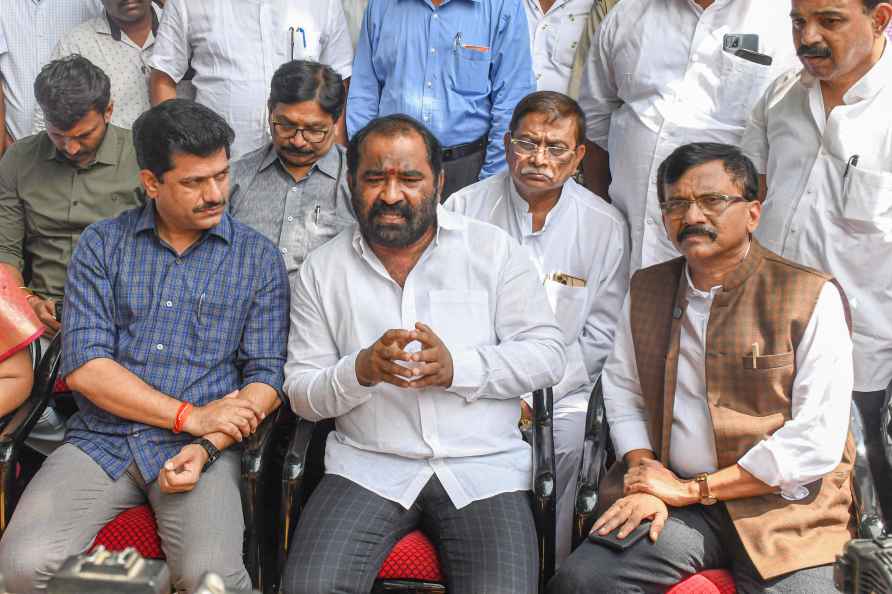 [Mumbai: Shiv Sena MP Sanjay Raut and MLAs Kalpesh Patil and Nitin Deshmukh interact with the media after the MLAs returned from rebel party leader Eknath Shinde's camp in Guwahati, in Mumbai, Thursday, June 23, 2022. ( /PTI] Mumbai, June 23 : Ahead of his possible resignation, Chief Minister Uddhav Thackeray started making 'final calls' after his emotional challenge to the rebels previous evening that he was ready to quit the post (CM) as well as Shiv Sena chief, here on Thursday. Simultaneously, alliance partner Nationalist Congress Party (NCP) state President and Minister Jayant Patil ruled out the possibility of the CM's demitting office and expressed optimism that the political crisis would be defused. On Wednesday evening, Thackeray addressed the state via social media and expressed his readiness to step down from both crucial posts provided the rebels led by Minister Eknath Shinde come to meet him and say they don't want him to continue. However, Shinde promptly spurned the CM's offer, reiterating his pre-condition that the Shiv Sena must first walk out of its Maha Vikas Aghadi (MVA) alliance government with the NCP and Congress. Hours after that, late on Wednesday, Thackeray and family packed up their bags and left the CM's official residence 'Varsha' at Malabar Hill and returned to the family home, 'Matoshri' in Bandra. Prior to that, he also held meetings with NCP President Sharad Pawar and NCP state chief Patil, Congress leaders including state President Nana Patole and central leader Kamal Nath, besides other senior Sena leadership. Thackeray is scheduled to address an online meeting of all top Mantralaya bureaucrats this day ostensibly to express his gratitude for their cooperation and contributions during the 30-month tenure of the MVA regime. The political suspense continued with Sena MP Sanjay Raut claiming in Mumbai that "around 20 MLAs" from the rebel group were in contact with the party leaders, besides the 15-odd currently in Mumbai. "About 20 MLAs are in touch with us... When they come to Mumbai, you will get to know. We will reveal soon under what circumstances and pressures these (rebel) MLAs left us," declared Raut. NCP's Patil expressed hope that the rebels would return to the Sena fold and ensure the continuation of the MVA government for which Thackeray is making all efforts and the other allies are fully helping out. /IANS

Bathinda: JCB operators stage a protest against the district administration after a police case was registered against a farmer under the Mining Act, in Bathinda, Thursday, June 23, 2022. ( /PTI […]

Polling begins for Rampur, Azamgarh bypolls in UP