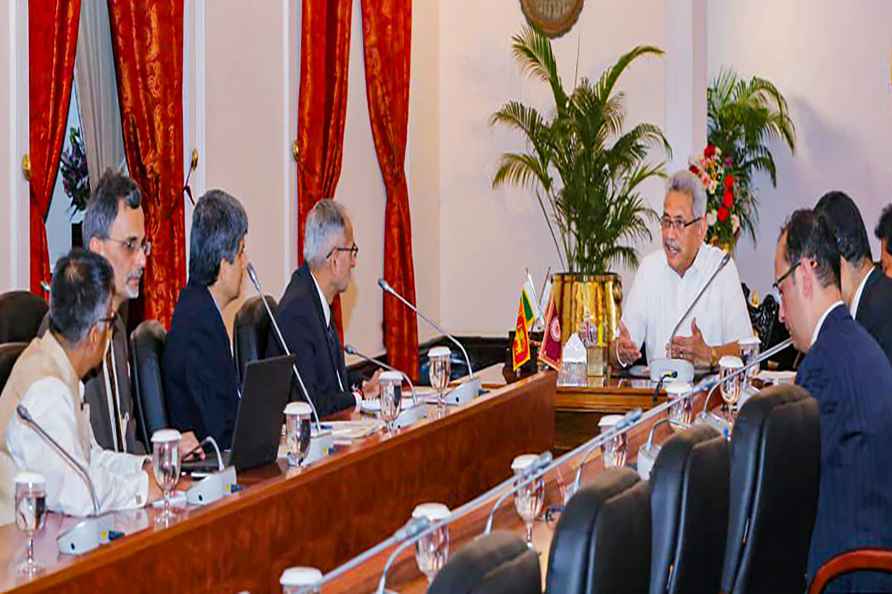 [**EDS: TWITTER IMAGE POSTED BY @MEAIndia ON THURSDAY, JUNE 23, 2022** Colombo: Foreign Secretary Vinay Kwatra with Sri Lanka President Gotabaya Rajapaksa and other dignitaries during a meeting, in Colombo, Sri Lanka. Department of Economic Affairs (DEA) Secretary Ajay Seth and Chief Economic Advisor V Anantha Nageswaran are also seen. ( /PTI] By Susitha Fernando Colombo, June 23 : A four-member Indian delegation led by Foreign Secretary Vinay Kwatra met Sri Lankan President Gotabaya Rajapaksa and Prime Minister Ranil Wickremesinghe on Thursday to assess the bilateral assistance provided by New Delhi in the wake of the island nation's ongoing economic crisis. According to Sri Lanka's Ministry of Foreign Affairs, Kwatra is is accompanied by Secretary of the Department of Economic Affairs Ajay Seth, Chief Economic Advisor Dr. V. Anantha Nageswaran and Joint Secretary of the Indian Ocean Region (IOR) Kartik Pande . At the meeting, the Indian delegation examined the possibility of another tranche of financial package to be disbursed to Sri Lanka. It is also scheduled to hold discussions with senior officials on the economic situation in the country and the short-term and long-term assistance requirements. As a single country, India with over $3.5 billion since January has provided the biggest assistance to Sri Lanka specially for the import of essentials items like fuel, food and medicine. On Wednesday, Wickremesinghe told Parliament about the the need to have a plan to revive the economy, adding that that India too would not be able to continue to assist Sri Lanka in the way she has been doing. "We have taken loans amounting to $4 billion under the Indian credit line. We have requested more loan assistance from our Indian counterparts. But even India will not be able to continuously support us in this manner. Even their assistance has its limits. "On the other hand, we too must have a plan to repay these loans. These are not charitable donations," he added Facing a severe food crisis, Sri Lanka is to import rice under an Indian credit line and issue stocks to the market in order to ensure price controls. "This will provide some relief to the Sri Lankan consumers," the Prime Minister added. Facing the worst ever economic crisis with dried up foreign reserves, Sri Lanka is expecting a financial bailout from the International Monetary Board (IMF) once its Executive Board visits for the final decision. In line with talks with IMF, the island nation also to organise a credit aid conference with its main lending countries India, Japan and China. /IANS

Zak Crawley has two Tests to show substance on top of his style: Nasser Hussain

[England's Stuart Broad, left, celebrates the dismissal of New Zealand's Tom Latham, right, during the first day of the third cricket test match between England and New Zealand at Headingley in Leeds, […]

Lahore, June 22 : Legendary Pakistan cricketer Zaheer Abbas has been admitted to the Intensive Care Unit (ICU) in a London hospital after his health "deteriorated severely", a report in Cricket Pakist […]