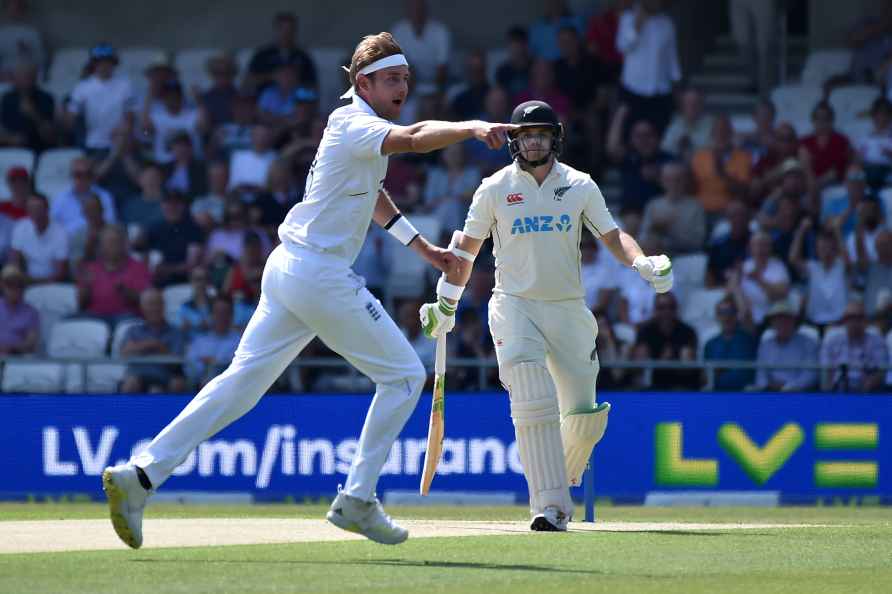 [England's Stuart Broad, left, celebrates the dismissal of New Zealand's Tom Latham, right, during the first day of the third cricket test match between England and New Zealand at Headingley in Leeds, England, Thursday, June 23, 2022. /PTI] Leeds, June 23 : Former England captain Nasser Hussain feels that opener Zak Crawley, who hasn't been at his scoring best in the ongoing Test series against New Zealand, has now got two matches in the next two weeks to show substance with the bat along with style. After a lean run last year, Crawley got himself back into the reckoning for England's Test squad with a fine 77 in the fourth Ashes Test at Sydney. Now, ahead of England's third Test against New Zealand at Headingley, starting from Thursday, Crawley goes into the game as the lone batter for the hosts, who is yet to register a significant score against his name in the series, amassing 43, 9, 4 and 0 till now, averaging just 14. "That combination of looking after the here and now while also thinking about what's ahead will make England a multi-dimensional Test side capable of winning in all conditions. One player they want for both now and the future is Zak Crawley. He has had a quiet time but it should be said that he has got out to three very good deliveries in his last three innings -- which often happens to openers in England," wrote Hussain in his column for Daily Mail. After the series ends, England will play the postponed fifth Test against India at Edgbaston followed by a three-match home series against South Africa. "When Crawley gets to 30 or 40 he has to remember those three deliveries that have got him out and think, 'You will have to bowl something special to get me out today' because at the moment he isn't doing himself justice. He has two Tests in the next two weeks to show some substance on top of his obvious style," added Hussain, who played 96 Tests for England. Hussain then explained the technical changes in Crawley's technique this summer and why he thinks the adjustments can work for him, citing Trent Bridge Test hero Jonny Bairstow. "We know what Crawley can do and we saw in the first innings of the first Test at Lord's that he has made some changes to his technique with his grip and is picking up his bat with softer hands, a little like Joe Root." "But we saw another player who has had technical issues in Jonny Bairstow change his fortunes at Trent Bridge by going to the mindset he knows best -- an attacking one. That worked for him and it can work for Crawley now because, as much as we go on about technique, the game at the highest level is played in the head -- evidenced by the remarkable change in England's collective mindset over the last two Tests." /IANS

Zak Crawley has two Tests to show substance on top of his style: Nasser Hussain

[England's Stuart Broad, left, celebrates the dismissal of New Zealand's Tom Latham, right, during the first day of the third cricket test match between England and New Zealand at Headingley in Leeds, […]

Lahore, June 22 : Legendary Pakistan cricketer Zaheer Abbas has been admitted to the Intensive Care Unit (ICU) in a London hospital after his health "deteriorated severely", a report in Cricket Pakist […]