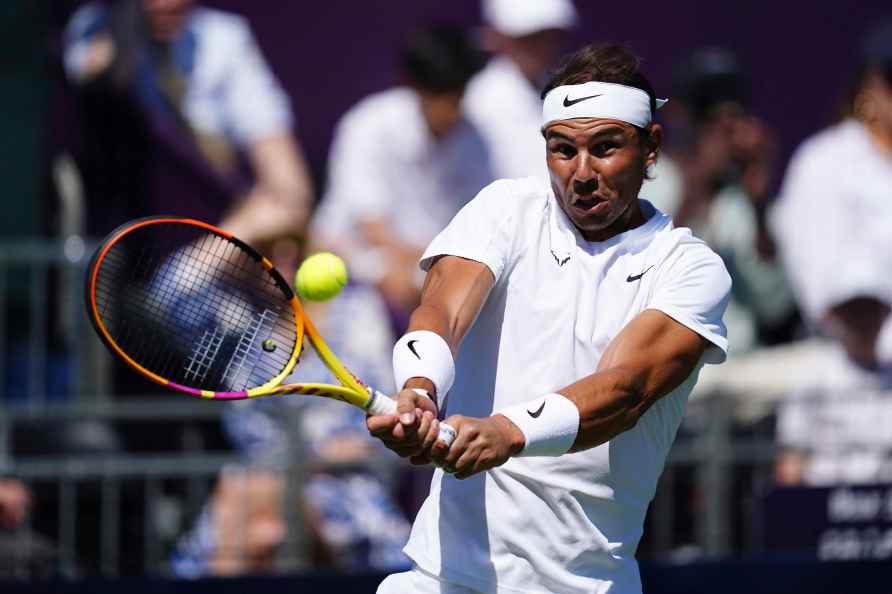 [Spain's Rafael Nadal during his ATP EXHO singles tennis match against Stan Wawrinka on day two of the Giorgio Armani Tennis Classic at the Hurlingham tennis club, England, Wednesday June 22, 2022. /PTI] London, June 22 : In what will be heartening news for the fans of Spanish stalwart Rafael Nadal and Serbian world No. 3 Novak Djokovic, the two top tennis players have started training at SW19 ahead of the season's third Grand Slam at Wimbledon, and there is anticipation of another classic clash between two of the greatest tennis players of all time. Djokovic, Nadal, Great Britain's Andy Murray and Swiss player Stan Wawrinka are among the stars who have been spotted training on the hallowed grass. Djokovic will pursue his seventh title at The Championships, where he owns a 79-10 record. The Serbian has won 21 consecutive matches at the tournament, having emerged victorious at the past three editions of the event. On the other hand, Nadal, who recently won his 14th title at Roland Garros to take his Grand Slam tally to a record-extending 22, would be hoping to add to the two Wimbledon titles he won in 2008 an 2010, especially after the 36-year-old recently said his debilitating left-foot injury had shown signs of improvement. Daniel Vallverdu, the current coach of Wawrinka and a former member of Andy Murray's team, posted a photo with Murray and Wawrinka as they continued their preparation for the grass-court major. Also in the image was Ivan Lendl, Murray's coach. The main draw action at The Championships will be played from June 27 through July 10. The prize money for the event will total a record 40,350,000 pounds. /IANS

Patiala: Family members and relatives gather for the funeral of pilgrims who died after drowning in the Gobind Sagar lake in Himachal Pradesh's Una district on Monday, at Banur near Patiala, Tuesday, […]