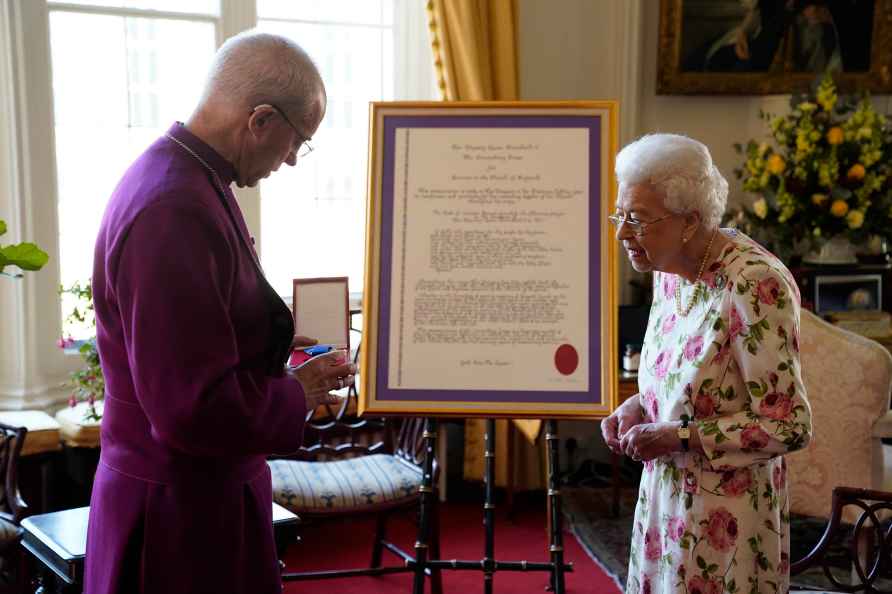 [Britain's Queen Elizabeth II receives the Archbishop of Canterbury Justin Welby at Windsor Castle, Windsor, England, Tuesday June 21, 2022, where he presented the Queen with a special 'Canterbury Cross' for her unstinting service to the Church of England over seventy years and a citation for the Cross, which was presented as a framed piece of calligraphy. /PTI] Bhubaneswar, June 21 : Union minister for Railways Ashwini Vaishnaw on Tuesday said a survey will be conducted soon to provide railway connection to Odisha's Konark which houses the Sun temple. "A survey will be conducted to connect Konark with railways either from Puri or any other nearby place," said Vaishnaw while briefing media in Konark. The union minister was in the historic town to participate in the International Yoga Day celebration at the Sun Temple. Commenting on the protest against the Agnipath scheme, he said: "Everyone should welcome the scheme which was floated by our defence forces keeping the country's security in view. It should not be politicised as it is the future of India and our defence forces." Vaishnaw appealed to the agitators to not damage railway properties or any other public properties as those belong to the nation. He also informed that high-speed 5G internet service will be rolled out in Odisha very soon. Later, the railways minister visited Puri where he inspected Puri railway station and reviewed the proposed developmental works as a world class station which will be constructed very soon. Vaishnaw said that the redevelopment works of Puri railway station will be a state-of-the art station in a world class model. He said that Rs 364 crore will be invested for redevelopment of the station along with its periphery area. Tender has been already floated and work will start soon, he added. The minister further informed that railway is taking necessary steps to accommodate pilgrims during the ensuing Rath Yatra scheduled for July 1. As Rath Yatra was organised without pilgrims for the last two years due to Covid 19 pandemic, the railway expects that a large number of pilgrims will be gathered at Puri, this year. Railway is also planning to run more than 200 special trains to and from Puri during the Rath Yatra period for smooth travel and convenience of the pilgrims, Vaishnaw said. /IANS

We Indians proved skeptics wrong. Democracy not only grew roots in this soil, it was enriched too: President Murmu.

We Indians proved skeptics wrong. Democracy not only grew roots in this soil, it was enriched too: President Murmu. […]