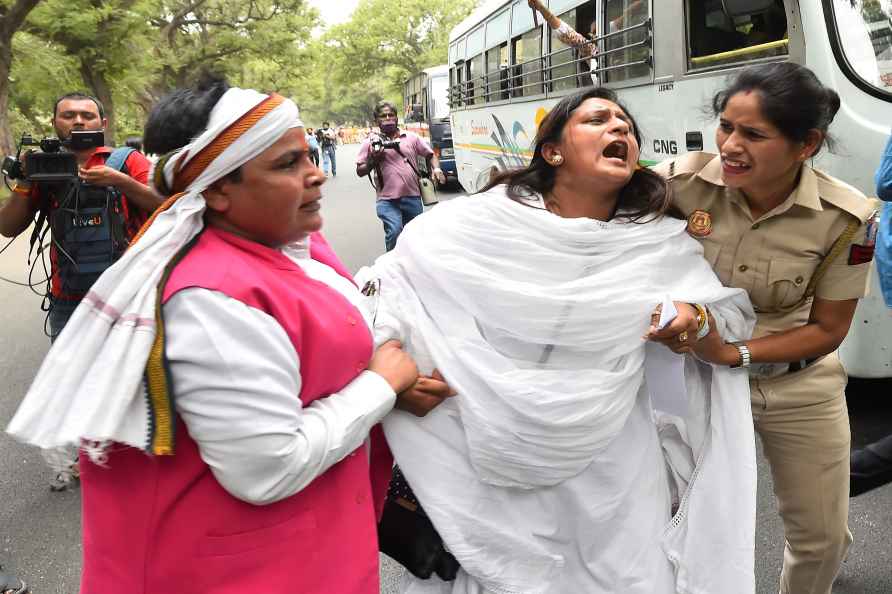 New Delhi, June 20 : More than 50 Congress workers were detained by the Delhi Police when they were trying to enter the national capital from the Singhu border on Monday, an official said. "We have detained around 50-55 Congress workers, including Kalka MLA Pardeep Chaudhary," Deputy Commissioner of Police Brijendra Kumar Yadav told IANS. As per the senior official, the workers were coming in different cars and were stopped by the police. "I have been detained by the police. I wanted to join my party members at the Jantar Mantar," Chaudhary said while speaking to IANS. He said that currently he has been kept at the Narela police station. Meanwhile, senior party leaders and parliamentarians are currently registering their protest against the government over defence recruitment scheme Agnipath and their leader Rahul Gandhi's ED questioning through a Satyagraha at Jantar Mantar. /IANS

As protests over corruption grow in Bengal, more Trinamool leaders use threatening language
Kolkata, Aug 14 : As protests on the issue of corruption are on the rise in West Bengal and Chief Minister Mamata Banerjee being targeted in many case

By M.K. Ashoka Bengaluru, Aug 14 : The national parties in Karnataka, ruling BJP and opposition Congress are preparing for the upcoming Assembly elections on a war-footing basis. Both the parties a […]

New Delhi, Aug 14 : Prime Minister Narendra Modi on Sunday paid homage to all those who lost their lives during partition to mark the 'Partition Horrors Remembrance Day'. In a tweet, the Prime Ministe […]