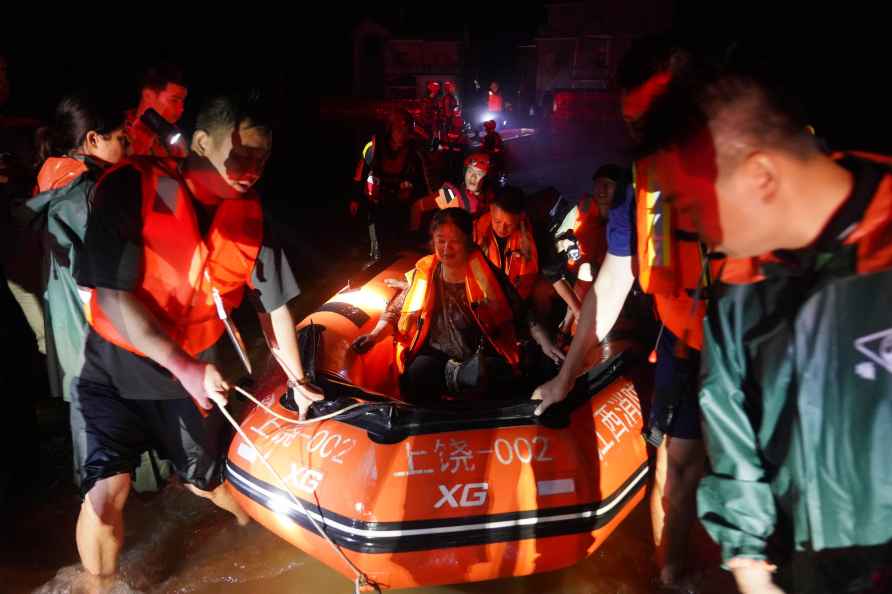 [In this photo released by Xinhua News Agency, rescuers evacuate stranded people in flood water in Dexing, southeastern China's Jiangxi Province, Monday, June 20, 2022. Heavy rainstorms are causing major flooding and landslides in southern China. /PTI] Beijing, June 21 : Incessant rainstorms have affected hundreds of thousands of people in China's Jiangxi and Hunan provinces, authorities said on Tuesday. In Jiangxi, the flood control and drought relief headquarters upgraded the flood control emergency response, as around 485,000 residents were affected, reports Xinhua news agency. Since June 18, heavy rain and floods had hit 55 counties across Jiangxi, with 43,300 hectares of crops affected. Direct economic losses amounted to 470 million yuan ($70 million), according to the headquarters. The local meteorological department said that the rain would weaken slightly on Tuesday, but heavy downpour would hit the province's southern and eastern parts. The rain belt would move north to the Yangtze River basin on Wednesday. Heavy rain have battered Hunan since June 19. As of Tuesday, 250,473 people had been affected by rainstorms, according to the provincial flood control and drought relief headquarters. Heavy precipitation has resulted in the collapse of 94 houses, forcing 51,143 local residents to relocate, and damaged more than 21,607 hectares of crops. The water level in the upper reaches of the Xiangjiang river have crossed the warning level due to the floods. /IANS