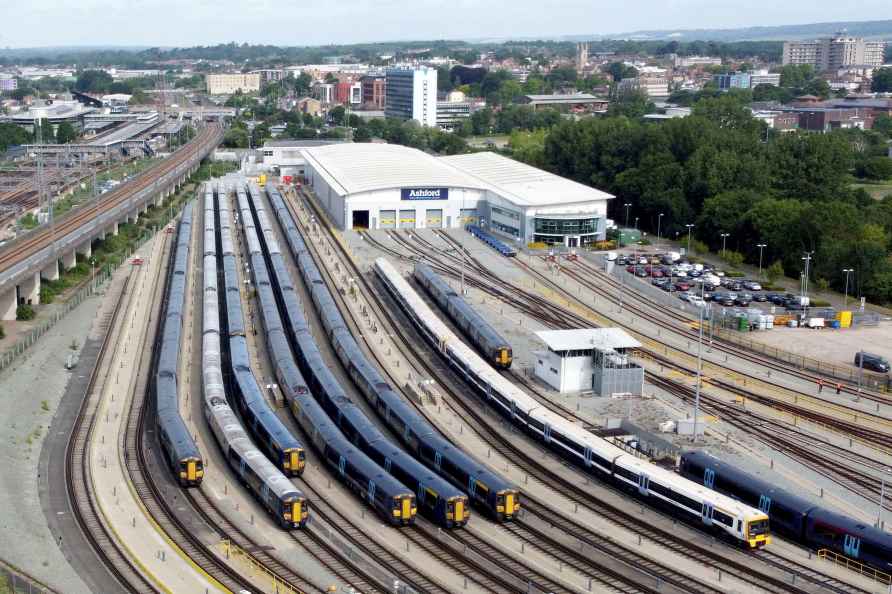 [Southeastern trains sit in sidings during a nationwide train strike, in Ashford, England, Tuesday June 21, 2022. Tens of thousands of railway workers have walked off the job in Britain, bringing the train network to a crawl in the country?─¶s biggest transit strike in three decades. /PTI] London, June 21 : The UK is facing the biggest rail strike in 30 years on Tuesday after 50,000 union members walked out demanding an 11 per cent pay rise, affecting millions of commuters across the country. Tuesday's strike is the first of three national rail strikes across England, Scotland and Wales, with two more planned for Thursday and Saturday, the BBC reported. Authorities have advised the general public to try not to travel as only a fifth of trains are due to run on half of the network. Meanwhile, there will be no train service in areas north from Glasgow or Edinburgh; to Penzance in Cornwall; to Swansea or Holyhead. Elsewhere, a shorter part of the day will be covered by services and the last departure for some long-distance routes will be in the middle of the afternoon. Andrew Haines, Chief Executive of Network Rail, the company that owns and runs Britain's rail infrastructure, told the BBC that he was "profoundly sorry" for the massive disruption. But he said there had been about 18 months of negotiations between Network Rail and the RMT union over proposed changes, pay and redundancies. Haines said there would be no more than 2,000 job losses, but believes all can be voluntary. The strike called by members of the RMT union is over pay and redundancies, with more due later this month and in July. London Underground workers have also gone on strike in a separate dispute over pensions and job losses, forcing commuters to take alternate modes of transporation. Transport for London and Network Rail's websites crashed on Tuesday morning as people desperately tried to find a route to get to work or school. /IANS

Eve of Independence Day in Patna

Chikmagalur: Large number of vehicles parked at Mullayanagiri peak due to the ongoing long weekend, in Chikmagalur, Sunday, Aug. 14, 2022. ( /PTI […]