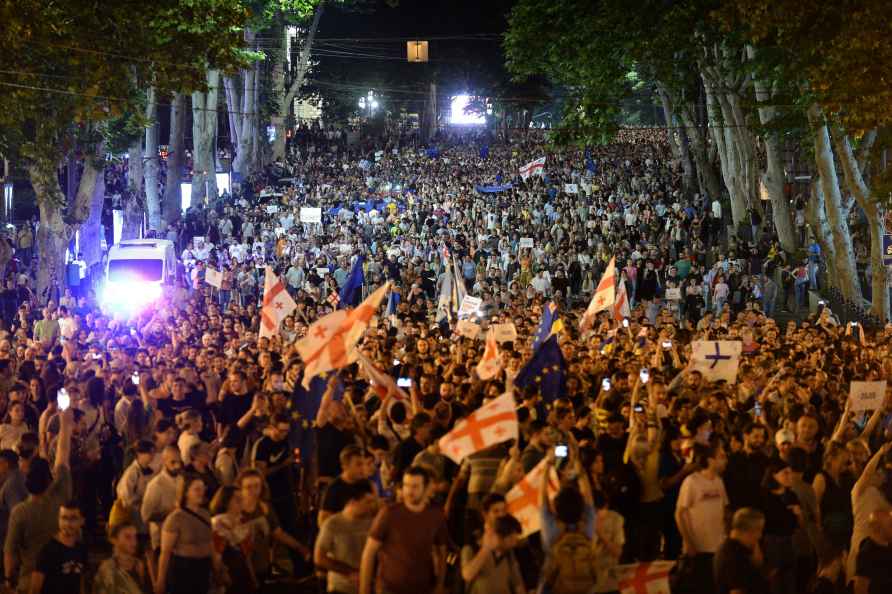 [Demonstrators hold Georgian national and EU flags during a public rally in front of the Parliamentary building in Tbilisi, Georgia, Monday, June 20, 2022, to show support for the country's EU membership bid. The European Commission is expected to voice their recommendation on Friday, while EU member states will gather in Brussels on June 23-24 to decide on the issue. /PTI] Harare, June 21 : Zimbabwean government health workers went on strike, citing incapacitation to continue reporting for work. The strike was announced on Monday, Xinhua news agency reported. Workers at Parirenyatwa Group of Hospitals, which is the country's biggest referral centre, marched to the offices of the Health Service Board within the hospital complex before gathering outside residential hostels for trainee nurses. A source at the hospital told Xinhua that they had resolved that the industrial action would continue until their demands for higher salaries were met. "The lowest-paid employee has been earning 18,000 Zimbabwean dollars (ZWL). The government's award of 100 per cent only takes that employee to 36,000 dollars plus the $175 in allowances, which does not take that employee anywhere," said the source who declined to be named fearing victimisation. As of Monday, the exchange rate was $1 to 338.4921 ZWL. The Zimbabwe Health Apex Council last week notified members of the public that its members would withdraw their services starting Monday, alleging that their employer -- the Health Service Board -- had also refused to meet them since April 2021. They said inflation had skyrocketed and is now greater than 130 per cent, year-on-year, with the poverty datum line for a small family of six now standing at 133,000 ZWL which even the highest-earning healthcare worker could no longer meet. "As the government health workers of Zimbabwe, it is with regret that we inform the general public that we have taken a decision to withdraw our labor effective Monday, June 20, 2022, " said the Council said in the notice. "It is not a decision that was taken lightly, we are fully cognisant of the human costs related to any action of this kind but the conditions of service, specifically the remuneration of healthcare workers are presently so poor that most health workers can no longer afford the service they provide and nor are they able to look after and fend for their families." It said that it was common knowledge that the economic conditions prevailing in the country had rapidly deteriorated especially over the last three months. "The decision to withdraw service has only come after repeated efforts to engage the employer, the Health Service Board and the Ministry of Health and Childcare, pleading with them to review the conditions of service of health workers," the Council added. The government last week said it had increased workers' salaries by 100 per cent starting July, with a promise to continue to review the workers' salaries in line with the prevailing economic conditions. Public Service, Labor and Social Welfare Minister Paul Mavima said a meeting between the government and its workers was scheduled for this week. /IANS

CWG 2022: Eilish McColgan emulates her mother Liz with 10,000m gold
[Birmingham: India's Sarita Singh competes in the qualifying round of women's hammer throw event during the athletics in the Alexander Stadium at the

Chennai, Aug 4 : India is not the only country to implement the windfall tax on domestic fuel but frequent tinkering with the tax rates creates uncertainty, said experts. They also said while th […]

Birmingham: Hima Das of India reacts as she crosses the finish line in her heat of the women's 200 mts during the athletics in the Alexander Stadium, at the Commonwealth Games, in Birmingham, UK, Thur […]