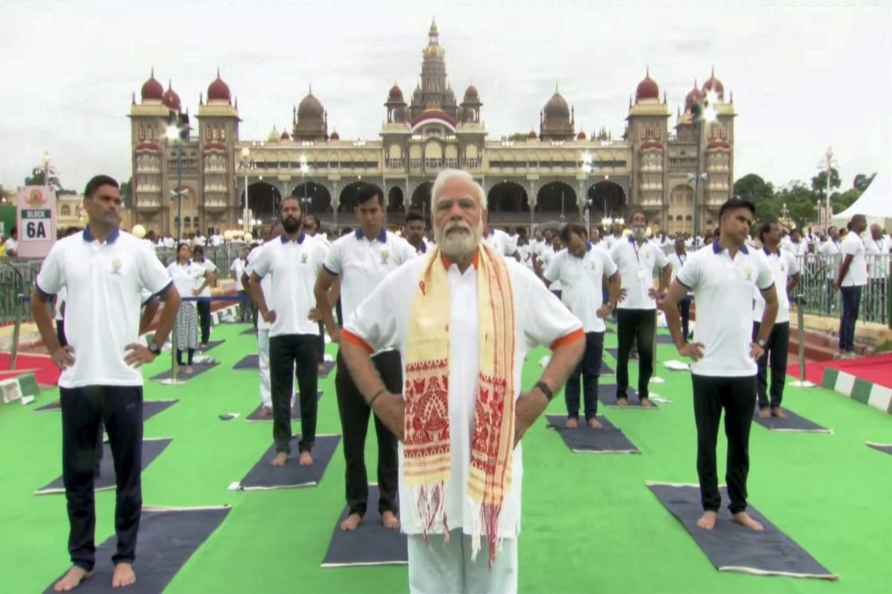 [**EDS: SCREENGRAB FROM A VIDEOCLIP ON @narendramodi** Mysuru: Prime Minister Narendra Modi performs yoga at the main event of the eighth edition of the International Day of Yoga, in the heritage city of Mysuru, Karnataka, Tuesday, June 21, 2022. ( /PTI] Mysuru (Karnataka), June 21 : Prime Minister Narendra Modi offered special worship to goddess Chamundeshwari (Maa Durga), the most revered goddess in southern Karnataka, during his first day of visit to Karnataka. Modi was accorded a traditional welcome and the main priest Shashishekar Dixit conducted special prayers as per the wish of the Prime Minister on Monday evening. The Prime Minister came to the temple in traditional south Indian attire. He worshipped Maha Ganapati idol and later performed pooja to the padukas of goddess Chamundeshwari. Afterwards, he sat with the main priest in front of the sanctum sanctorum and offered special prayers. After the special puja, Modi went to the Pradakshina of the temple and offered prayers to lord Hanuman. This was his first visit to the Chamundeshwari temple in Mysore. He addressed a massive gathering at the Maharaja College Ground earlier in Mysuru and reiterated his commitment to the development of the state. He proclaimed that Mysuru city is going to be the centre of attraction on the International Yoga Day celebrations on Tuesday. He also attended a programme organised by the JSS Mahavidyapeetha in Mysuru. He inaugurated KSS Sanskrit Pathshala built by JSS Mahavidyapeetha and released three books on Yoga written by Siddeshwar Swamiji. He dedicated the nation to the Centre of Excellence of All India Institute of Speech and Hearing built at a cost of Rs 155.49 crore and laid foundation stone for Naganahalli and Mysuru Coaching Complex which will be built with a budget of Rs 487 crore. Meanwhile, Mysuru, considered as the cultural and heritage capital of Karnataka, is all set for the International Yoga Day celebrations on Tuesday (June 21). The Prime Minister is participating in the mega event of the International Yoga Day celebrations organised in the premises of the historical and magnificent Mysuru Palace on early Tuesday morning. As many as 19 'asanas' (exercises) of Yoga will be exhibited in 45 minutes during the celebration of International Yoga Day in which Modi is participating between 7 and 7.45 a.m. Authorities said that 1,200 children, selected among 20,000 will take part in Modi's event. The celebration will start with a 1-minute prayer. Next four minutes will be given for stretching and movements following which 19 asanas will be performed which include Tadasana, Vrikshasana, Padahastasana, Ardha Chakrasana, Vakrasana, Makarasana, Setubandhasana, Shalabhasana and others. The programme will begin at 6.30 a.m. on Tuesday. Union Minister for Ayush, Sarbanada Sonowal will speak for five minutes, followed by the speech of Chief Minister Basavaraj Bommai for five minutes. The Prime Minister will give a message on International Yoga Day for 20 minutes. /IANS