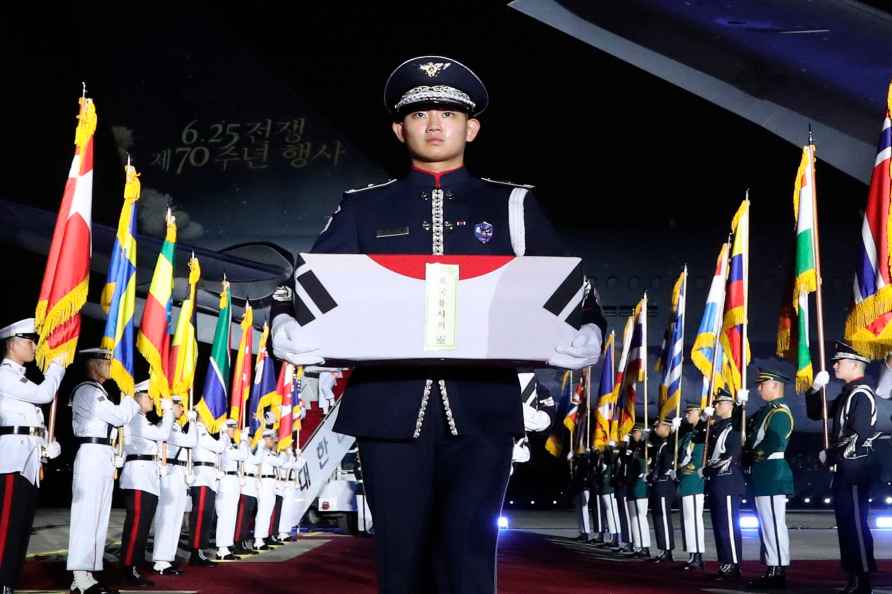 Seoul, June 20 : South Korean President Yoon Suk-yeol hosted a "housewarming" event in the front yard of the presidential office in central Seoul, inviting some 400 neighbours and others to celebrate the relocation of the office. Living up to his campaign pledge, Yoon has moved the presidential office to the former Defence Ministry building in Yongsan from Cheong Wa Dae in line with his campaign pledge to connect better with people, reports Yonhap News Agency. About 400 residents of Yongsan, young Afghan refugees and small business owners were invited to Sunday's event held in time for the completion of remodelling work at the building, according to officials. "I thank you for allowing me and the presidential office staff into Yongsan and giving us a warm welcome," Yoon said. "I will work harder." "I think South Korea and the whole world will be able to become happier when South Koreans, currently in a difficult situation, and people across the world have the sense of becoming one and unite," the President noted. The Sunday event included a flea market and a street food event, with small merchants operating around the presidential office taking part. /IANS

Gehlot camp not in favour of Pilot as CM, says Maken
Jaipur, Sep 26 : Congress leader Ajay Maken, who was in Jaipur along with Mallikarjun Kharge to convene the CLP meeting for deciding the new CM face,

Now LOC issued against 2 PFI leaders
New Delhi, Sep 26 : The National Investigation Agency (NIA) has issued a Look Out Circular against two PFI leaders of Kerala in connection with violen

'Unofficial meeting is indiscipline', Maken hints action against defiant Raj MLAs
Jaipur, Sep 26 : As the crisis in the Congress seems to deepen in Rajasthan, the two observers sent by the party high command, Ajay Maken and Mallikar

Gehlot camp not in favour of Pilot as CM, says Maken

Jaipur, Sep 26 : Congress leader Ajay Maken, who was in Jaipur along with Mallikarjun Kharge to convene the CLP meeting for deciding the new CM face, on Monday spoke to the media after a high-voltage […]