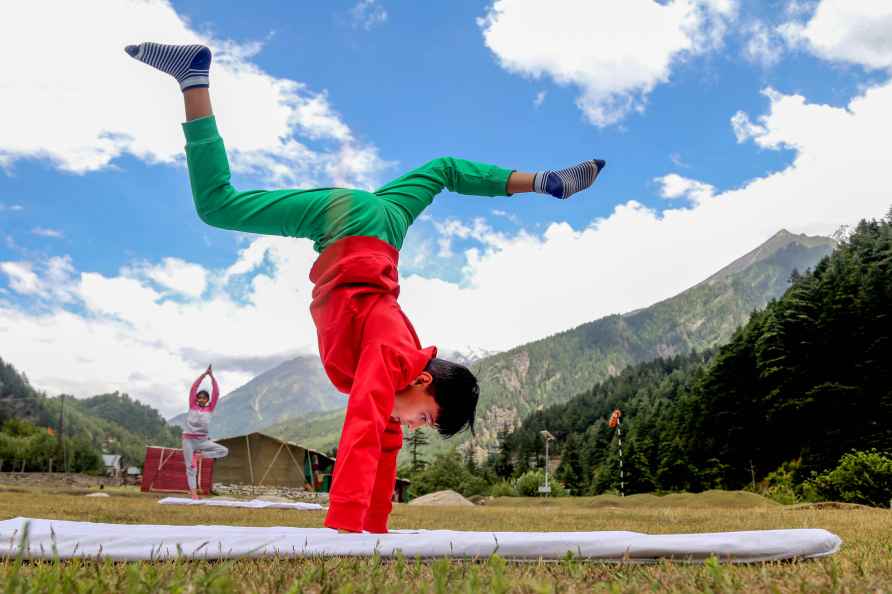 [**EDS: HANDOUT PHOTO MADE AVAILABLE FROM DFENCE PRO ON MONDAY, JUNE 20, 2022** Gangotri: People perform yoga 'asanas', on the eve of the International Day of Yoga, at a remote place in Harsil, near Gangotri. ( /PTI] Mumbai, June 20 : Ruchita Shah, a young Mumbai-based journalist, has been a regular traveller on the local trains, touted as the lifeline or rather a second home for the more than 22 million city-dwellers. Many spend hours commuting in it, bonding over games, sharing common griefs and joys and also festivals. Besides being a journalist, Shah who has been an avid yoga practitioner, once came up with the idea of performing yoga while being on a train. What started as a fun activity in 2017, with just one person teaching 15-20 people has spiralled into a full-blown foundation that is helping scores of Mumbaikars perform yoga, while travelling. "I used to travel in the train every day, to commute to office and to yoga class from Borivali to Grant Road to Bandra and back home. We had a group on the train, playing cards, having fun and lots of other activities. It was our second home. One day it struck me that we do so many things on the train, why not try yoga," Shah said. "In a busy world, where we work for more than 9 hours and travel takes another two or more hours, we don't have time left for exercise or yoga. The commuting time in the train can also be utilised for our health - that was the thought behind the initiative," she added. After taking due permission from Western Railways, the initiative was officially rolled out on International Yoga Day in 2017, where commuters performed asanas for the first time in the train for about 15-20 minutes. Six years later, more than 100 yoga teachers, both young and old, have joined the programme now run by Heal-Station, a yoga learning platform, founded by Shah. "There are a few yoga asanas that focus on breathing, like sitting parvatasana, sukshma vyayama which helps loosen joints and removes the energy blockages, and other stretching exercises like shoulder rotation that helps relax both the body and mind. These can be practised even in a crowded train both while standing and sitting," Shah said. A team of 30-45 teachers together with commuters perform yoga in Mumbai's local trains on two days: on International Women's Day (March 8) and on International Yoga Day (June 21). The International Day of Yoga has been celebrated annually on 21 June since 2015, following its inception in the United Nations General Assembly in 2014. The year 2022 being the sixth for the initiative also coincides with the 75th year of India's Independence. Thus to mark that, Shah said about 75 teachers will participate and they have also taken permission from Central Railways to spread the programme to more parts of Mumbai. A team will also teach commuters at the historic Chhatrapati Shivaji Terminus, which is also a UNESCO World Heritage site. The theme this year is "Travel Time can be a fitness time", with the slogan "Ab se hoga train main Yoga". "The response from commuters has been incredible so far, with 95 per cent of travellers performing yoga with us," Shah said. "We want to roll out the initiative on a day-to-day basis and also to various other cities, like Delhi and Kolkata, apart from spreading it far and wide in Mumbai," she added. However, getting permission takes up most of her time, she noted, while making an appeal to the Railway Ministry to come up with such solutions to utilise the travel time of people for boosting their health and mental peace. /IANS

Morigaon: Authorities demolish Jamiul Huda madrassa of Mustafa alias Mufti Mustafa, who was recently arrested for his links with a Bangladesh-based terror outfit, at Moirabari in Morigaon district of […]

Jammu: Wailing mother and other relatives of army soldier Sukhjinder Singh at his residence at Suchetgarh near Jammu, Thursday, Aug 4, 2022. Singh died after being hit by a boulder during patrolling n […]

New Delhi: Congress MPs at a meeting in Parliament House, in New...