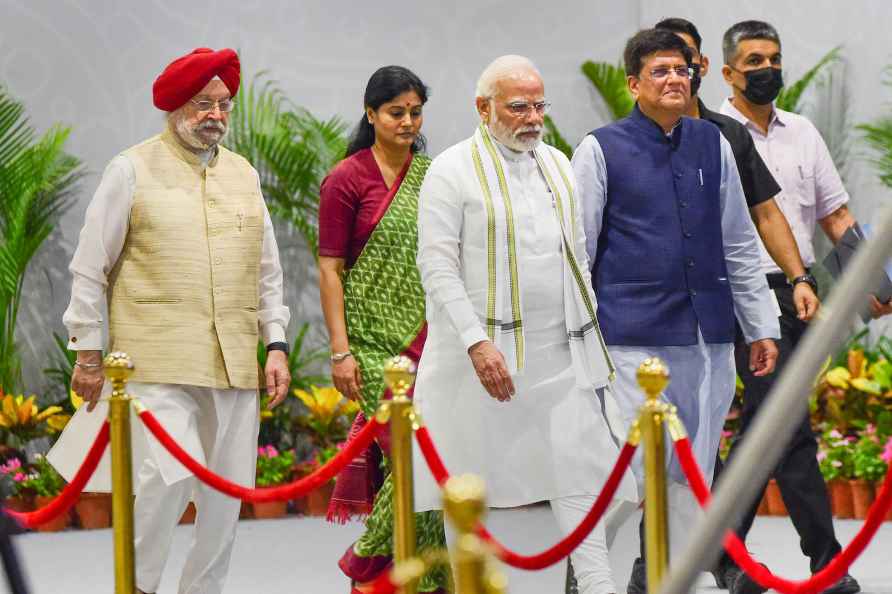 New Delhi, June 19 : After inaugurating the main tunnel and five underpasses of Pragati Maidan Integrated Transit Corridor Project, Prime Minister Narendra Modi suggested that on Sundays for a few hours the tunnel should be kept exclusively for school children and pedestrians to see the artwork and painting. The Prime Minister, who walked the tunnel leaving the vehicle on Sunday after inaugurating it, said the artwork has been a value addition to the planned work and is a great study centre of 'Ek Bharat Shreshtha Bharat'. "Perhaps, this is among the longest art galleries anywhere in the world. I suggest that it may be explored that on Sundays, when traffic is less, for a few hours the tunnel should be kept exclusively for school children and pedestrians to appreciate the artwork and the spirit that it embodies," the Prime Minister said. The Prime Minister dedicated to the nation the main tunnel and five underpasses of Pragati Maidan Integrated Transit Corridor Project on Sunday. The Integrated Transit Corridor project is an integral part of Pragati Maidan Redevelopment Project. Addressing the gathering, the Prime Minister called the project a big gift from the Central government to the people of Delhi. He recalled the enormity of the challenge in completing the project due to the traffic congestion and the pandemic. He credited the new work culture of New India and workers and engineers for completing the project. "This is a New India that solves the problems, takes new pledges and works tirelessly to realise those pledges," the Prime Minister said. He said this tunnel is part of the campaign to transform Pragti Maidan according to the needs of the 21st Century. He lamented the fact that despite changing India, Pragti Maidan, which was created to showcase India, got lagged behind due to lack of initiative and politics. "Unfortunately there was not much 'Pragati' (progress) of the Pragati Maidan. Despite a lot of fanfare and publicity earlier, this was not done. The Government of India is working continuously for state-of-the-art facilities, exhibition halls for world class events in the capital of the country," he said. Modi mentioned that modern infrastructure developed by the Central government is changing the picture of Delhi and making it modern. "This change in picture is a medium of changing destiny also... This focus on modernisation of infrastructure is driven by increasing ease of living for the common people," Prime Minister said. He also reiterated the need for environment sensitive and climate conscious infrastructure development. The Prime Minister talked about the great benefits that will accrue from the integrated corridor in terms of saving of time and fuel, 55 lakh litre as per one estimate, and also decongestion of traffic leading to environmental dividend, equivalent to planting five lakh trees. He said these permanent solutions to enhance ease of living are the need of the hour. "In the last eight years, we have taken unprecedented steps to solve the problems of Delhi-NCR. In the last eight years, the metro service in Delhi-NCR has expanded from 193 km to 400 km, more than double," he said, and asked the people to develop a habit of using the metro and public transport. He pointed out that the Delhi-Mumbai Expressway, Delhi-Dehradun Expressway, Delhi-Amritsar Expressway, Delhi-Chandigarh Expressway and Delhi-Jaipur Expressway are making Delhi one of the best connected capitals of the world. The Prime Minister said that the country is creating multimodal connectivity through the vision of PM GatiShakti National Master Plan. "PM GatiShakti National Master Plan is a medium of Sabka Vishwas and Sabka Prayas," he added. /IANS

Second Airport at Chennai: Local people at Parandur protest
Chennai, Aug 3 : The local people of Parandur near Sriperumbudur in the Kancheepuram district of Tamil Nadu are up in arms against the decision of Tam

Zero-hour notice in RS on 'surge' in deposits by Indians in Swiss banks
New Delhi, Aug 3 : Congress MP Pramod Tiwari on Wednesday gave zero-hour notice in the Rajya Sabha on the issue of the 'surge in Indian money held in

Hyderabad, Aug 3 : The claim by a Telugu YouTuber that he visited Islam's holiest site Mecca in Saudi Arabia has sparked a row with a section of netizens calling for action against him for violating t […]