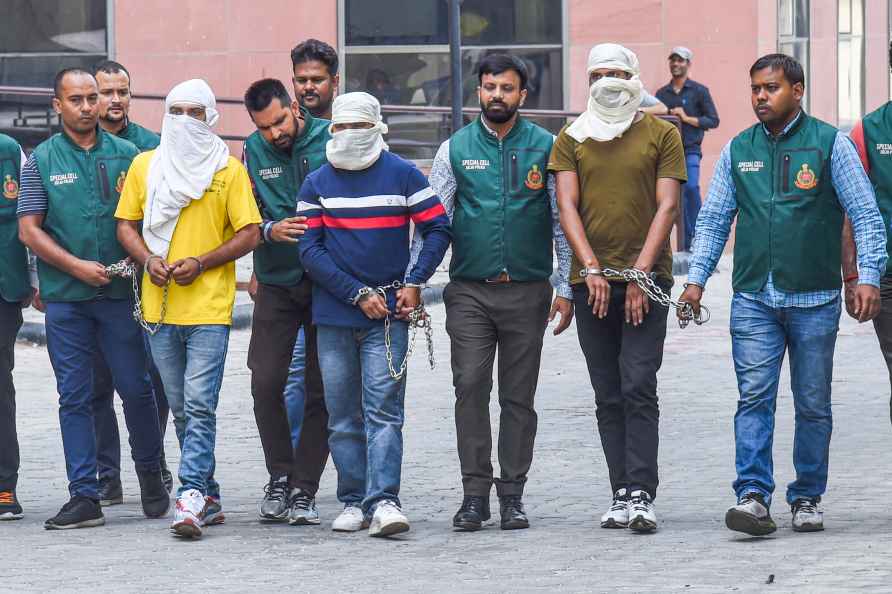 [New Delhi: Security personnel with three persons including two main shooters arrested by Delhi Police Special Cell in the Sidhu Moose Wala murder case, at police headquarters, in New Delhi, Monday, June 20, 2022. ( /PTI] New Delhi, June 20 : In a major breakthrough, the Special Cell of Delhi Police on Monday arrested two main shooters and their one facilitator who were involved in the killing of Punjabi singer Shubhdeep Singh, popularly known as Sidhu Moosewala. "Of the two shooters, one is the head of the module," a senior Delhi Police official said. The accused were identified as Priyavrat alias Fauji (26), a resident of Sonipat in Haryana and Kashish alias Kuldeep (24). Senior official said that the accused Priyavrat, who was the head of 'Bolero Module' of the gangsters, led the team of shooters and was in direct touch with Goldy Brar at the time of incident." He was the main shooter and executioner of murder and can be seen in CCTV footage of petrol pump Fatehgarh before the incident," the official said. Accused Priyavrat was previously found involved in two murder cases and was arrested in 2015 in one murder case of Sonipat and wanted in another murder case of Sonipat in 2021. Kuldeep, the second accused shooter, was also seen in CCTV footage of petrol pump Fatehgarh before the incident," the official said. The third arrestee was identified as Keshav Kumar (29), a resident of Bhatinda, Punjab. "Accused Keshav acted as a facilitator and received the shooters just after the shootout in an Alto car," said the official. Accused Keshav accompanied the shooters till Mansa on the day of incident, during reconnaissance and also during the previous attempts. Apart from arresting the two accused shooters, the police have also recovered a huge number of arms and explosives. Moosewala, 28, one of the most famous Punjabi language singers of the current times, was shot dead on May 29 while he was travelling in a car and around 8 assailants fired over 30 shots at Jawaharke village of the Mansa district in Punjab. Sidhu was found soaked in his own blood on the driving seat of the Mahindra Thar SUV while two more occupants in the car, Sidhu's friends, Gurwinder Singh and Gurpreet Singh also received bullet injuries, but they survived. /IANS

Rajkot (Saurashtra), Aug 3 : The Rajkot Police on Wednesday foiled a loot attempt by a gang of robbers and caught four of them. However, two others members managed to escape. Deputy […]

Islamabad, Aug 3 : Pakistan's consumer price index (CPI), a main gauge of inflation, rose 24.9 per cent year on year in July as compared to the same month a year ago when it was recorded at 8.4 per ce […]