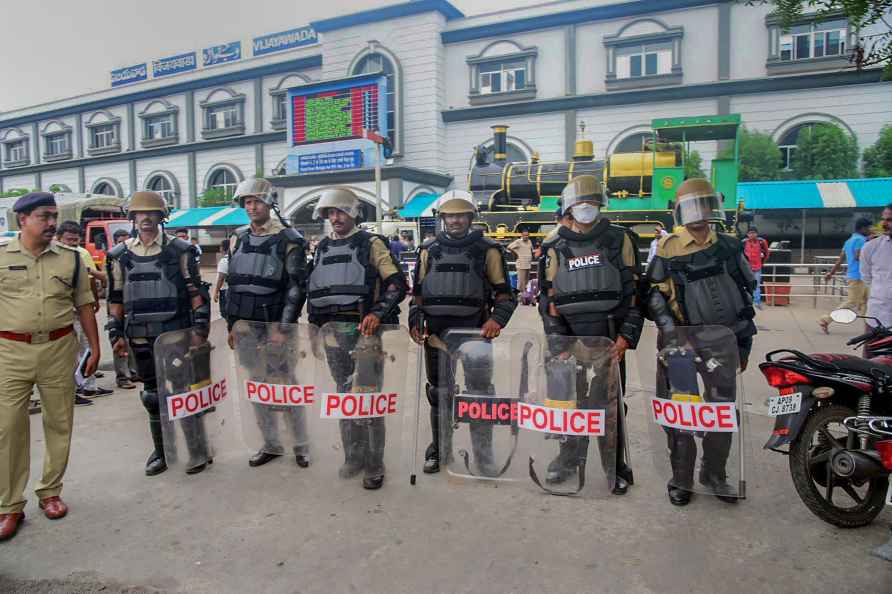 [Vijayawada: Security personnel stand guard outside Vijayawada Junction railway station in wake of protests against the Central government's 'Agnipath' scheme, in Vijayawada, Monday, June 20, 2022. ( /PTI] Amaravati/Hyderabad, June 20 : Police and railway authorities remain on high alert in Andhra Pradesh and Telangana in view of the 'Bharat bandh' call given by some organisations to protest against recently announced scheme Agnipath for Army recruitment. Security was tightened at all major railway stations, offices of the Central government and Army recruitments authorities in both the Telugu states to prevent any protest by the Army job aspirants. Railway police were keeping a tight vigil at all the major railway stations in the wake of June 17 violence at Secunderabad railway station. Additional forces were deployed around the stations to prevent any attempt to stage a protest. The security personnel were checking vehicles and tickets of passengers to ensure that the protestors did not enter the stations. There was high security at Secunderabad, Nampally, Kachegua stations in Hyderabad, Kazipet, Jangaon, Vijayawada, Guntur, Visakhapatnam, Tirupati and other major stations. Police have made it clear that there is no permission for Bharat bandh or protests. They have warned of stringent action against those participating in the protests. Vijayawada Police Commissioner Kanti Rana Tata, Eluru SP Rahul Dev Sharma and other police officials have warned students and youth that if they indulge in any illegal activity and if cases are booked against them, this would render them ineligible for government jobs in future. They have also been told that if cases are booked they will not be issued passports. Ever since the violence rocked Secunderabad station, authorities at other key stations in both the states remained on high alert. On June 18, Visakhapatnam railway station was closed for a few hours as a precautionary measure. Following intelligence reports that army job aspirants may resort to similar protest, police in Andhra Pradesh were keeping a close vigil on suspects. As the role of some coaching institutes in instigating violence at Secunderabad has been confirmed by railway police, the owner of an institute has been detained. Private coaching institutes train youth aspiring for jobs in the Army. There are about 2,000 aspirants in the Telugu states who had cleared the physical test and were awaiting the written test to be conducted. They were agitated as the written test was postponed several times due to various reasons, including the Covid-19 pandemic. After the Centre announced the Agnipath scheme on June 14 and the written exam was cancelled, the aspirants felt that they will be deprived of employment opportunities. Railway police probing violence at Secunderabad station found that the owners of coaching institutes misguided these youth to stage protests on the lines of the one witnessed in Bihar on June 15 so that they could draw the attention of the Central government. Several WhatsApp groups were created to mobilise youth from various districts. Police said they reached Hyderabad with a plan to create disturbances at Secunderabad station. /IANS