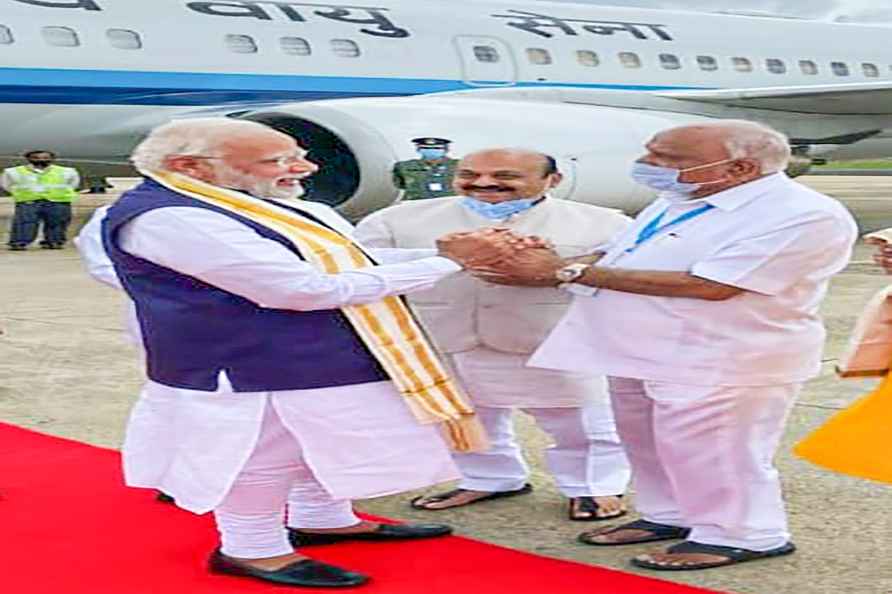 [**EDS: TWITTER IMAGE POSTED BY @CMofKarnataka ON MONDAY, JUNE 20, 2022** Bengaluru: Prime Minister Narendra Modi being welcomed by Karnataka Governor Thaawarchand Gehlot upon his arrival, in Bengaluru. Karnataka Chief Minister Basavaraj Bommai is also seen. ( /PTI] Bengaluru, June 20 : Prime Minister Narendra Modi arrived here on a two-day Karnataka visit on Monday. Governor Thawar Chand Gehlot, Chief Minister Basavaraj Bommai and others extended a warm welcome to him at Yelahanka Indian Air Force Base. State BJP President Nalin Kumar Kateel and former Chief Minister B.S. Yediyurappa was also present at the base to receive the PM. Prime Minister Modi is scheduled to inaugurate, dedicate and lay the foundation for 19 projects worth more than Rs 33,000 crore in the state. He will inaugurate Centre for Brain Research (CBR) built at a cost of Rs 280 crore at Indian Institute of Science (IISc) at 12.30 p.m. The creation of CBR and the vital research being carried out in rural Karnataka will provide appropriate, evidence- based public health interventions to delay the onset of dementia and slow its progress. PM Modi will also lay the foundation stone for 832-bedded not-for-profit Bagchi-Parthasarathy Hospital which will be built at a cost of Rs 425 crore. This will integrate science, engineering and medicine on a single campus, taking full advantage of the century-old excellence of IISc in science and engineering. He will arrive at Bengaluru University Campus at 1.45 p.m. and dedicate 150 ITI's upgraded as Technology Hubs at a cost of Rs 4,736 crore. He will inaugurate Babasaheb Dr B.R. Ambedkar School of Economics University (BASE) and unveil Ambedkar's statue. The PM will reach Kommaghatta at 2.45 p.m. to inaugurate a slew of programmes and address a massive public gathering. He will dedicate the project of 100 per cent Electrification of Konkan Railways at a cost of Rs 1,287 which saves 70 per cent fuel expenditure. Karnataka police are on high alert mode as the intelligence has warned that protests on Agnipath scheme might break out during Prime Minister Narendra Modi's public rallies in Karnataka. Prime Minister Modi is visiting the state after one-and-a-half years. He will participate in 10 programmes organized in Bengaluru and Mysuru cities including the International Yoga Day on June 21. /IANS

Mexico City, Aug 19 : Eight years after 43 students went missing in Mexico's Guerrero state, the government has declared all of them dead. All indications point to this "sad reality", dpa news a […]

Tel Aviv, Aug 19 : Israel has closed several Palestinian advocacy groups after classifying them as terrorist organisations last year, the groups said. On Thursday, Al-Haq, one of the human right […]