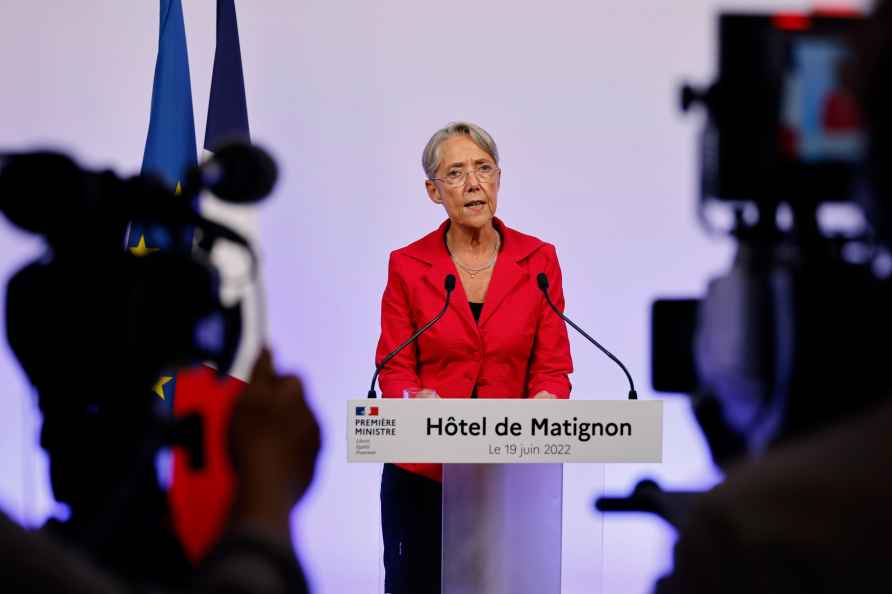 [France's Prime Minister Elisabeth Borne gives a speech in Paris Sunday June 19, 2022. French President Emmanuel Macron's centrist alliance was projected to lose its majority despite getting the most seats in the final round of the parliamentary election Sunday, while the far-right National Rally appeared to have made big gains. A new coalition ?─¯ made up of the hard left, the Socialists and the Greens ?─¯ is projected to become the main opposition force with about 150 to 200 seats of the 577 members of the National Assembly. /PTI] Paris, June 20 : French President Emmanuel Macron will not have an absolute majority in the upcoming National Assembly following the second round of legislative elections, according to the final results published on Monday by the Interior Ministry. Macron's alliance Ensemble won 245 seats in Sunday's elections, falling short of the 289 seats required for an absolute majority, reports Xinhua news agency. Left-wing alliance NUPES led by Jean-Luc Melenchon won 131 seats and the far-right National Rally led by Marine Le Pen made history with 89 seats, according to the official results. The abstention rate of the second-round vote stood at 53.77 per cent, compared to 57.36 pe rcent in 2017, the Ministry added. According to French news channel BFMTV, the Cabinet Ministers who were not elected as deputies in their constituency will have to leave the government. Sunday's elections include 572 run-off races with a total of 1,148 candidates to elect the 577-member National Assembly. Macron, who defeated Le Pen to secure his second presidential term in April, had an absolute majority during his first term. /IANS

Khartoum, Aug 11 : Deputy Chairman of Sudan's Sovereign Council, Mohamed Hamdan Daqlu has vowed to reveal the "malicious plots" against the cohesion among tribes. "There are malicious plots targ […]