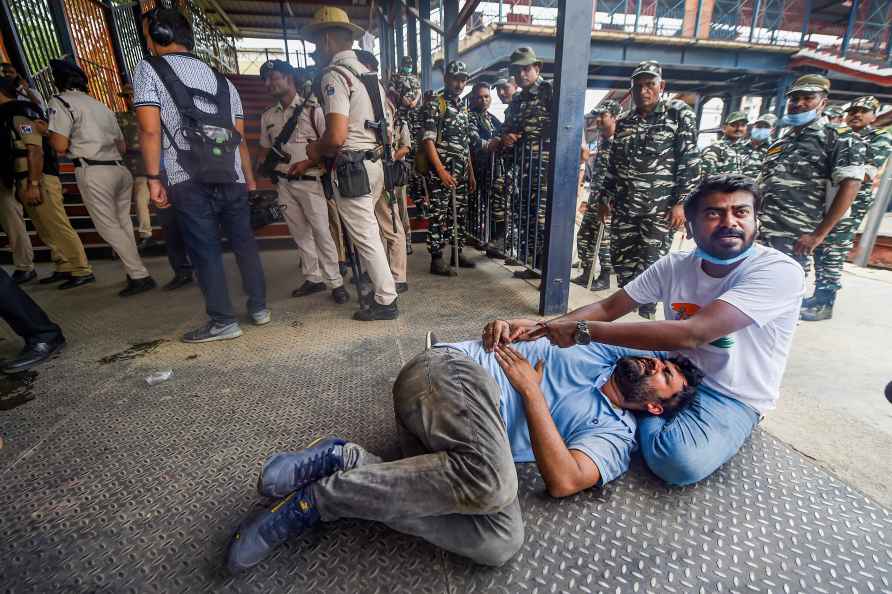 [New Delhi: An injured Indian Youth Congress member after they stopped a train during their protest over ED's probe against Rahul Gandhi in the National Herald case and Centre's 'Agnipath' scheme, at Shivaji Bridge railway station in New Delhi, Monday, June 20, 2022. ( /PTI] New Delhi, June 20 : Congress leaders and workers sat on a 'satyagrah' at Jantar Mantar here for the second consecutive day against the Agnipath scheme and ED's questioning of Rahul Gandhi as what party calls 'vendetta politics'. A delegation of the Congress will meet President Ram Nath Kovind in the evening. The party has also called its Parliamentary board meeting in which all MPs have been asked to attend. Meanwhile, Rahul Gandhi appeared before the ED for the fourth time on Monday. Earlier, he was questioned for 30 hours in three days. Congress leader Kanhaiya Kumar, who joined the protest at Jantar Mantar, lashed out at BJP leaders over the Agnipath scheme. He said, "First, make your children the beneficiary of this scheme. Minister's son becomes secretary in the BCCI and youth of the country will get only four years contractual job and then will become watchmen." "If a child of a family gets a job in the army, their respect increases in the society. A job in the army is a question about the security of the country, do not make fun of it. Children of poor farmers and labourers go to the army. Agnipath scheme has been brought with an intention to push the youth into the fire. This scheme should be withdrawn immediately," he added. Chhattisgarh Chief Minister Bhupesh Baghel also joined the protest along with senior Congress leaders against the Agnipath scheme and ED's action against Rahul Gandhi. He said, "the central government will have to withdraw the Agnipath scheme. The central government is behaving disgracefully with those who protect our borders. The future of the youth, the country's border and security are in danger if this scheme is implemented." He also raised questions on the central government using the ED in National Herald case. He said, "Rahul Gandhi raised his voice against inflation, unemployment and Rafale scam, this is the reason why the central government wants to shut his voice. BJP wants to weaken Congress, hence trying to defame Rahul Gandhi through ED." The Congress workers said that until the government withdraws this scheme, the demonstrations will continue. Heavy police force has been deployed at the railway stations to prevent any untoward incident. The opposition and the youths across the country have demanded withdrawal of the Agnipath scheme. Fierce protests have erupted in many states after the central government announced the Agnipath scheme. The demonstrations entered the fifth day on Monday. In the past four days, protesters have torched train coaches and damaged public properties in several areas. /IANS