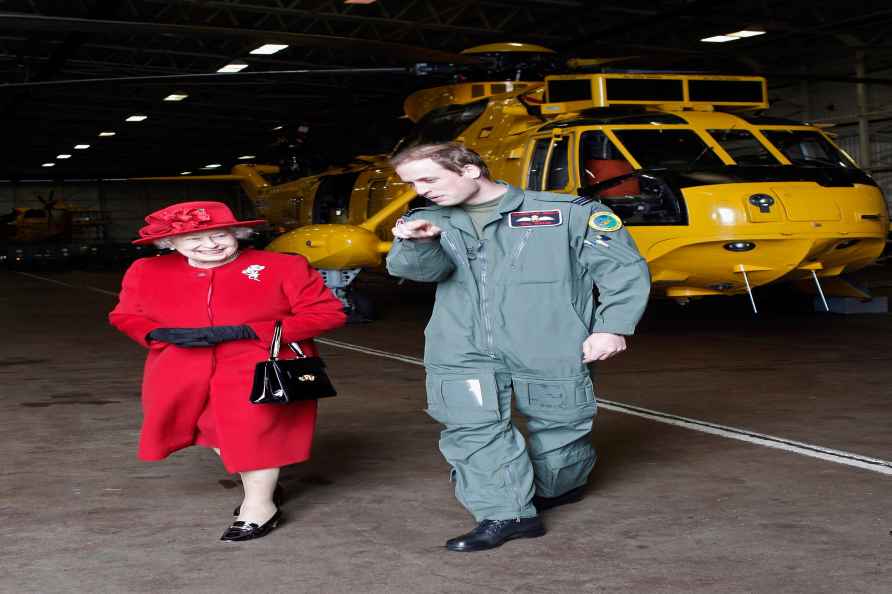 [FILE - Britain's Queen Elizabeth II is escorted by Prince William, during a visit to RAF Valley, Anglesey, Wales, where he is stationed as a search and rescue helicopter pilot, Friday April 1, 2011. The world watched as Prince William grew from a towheaded schoolboy to a dashing air-sea rescue pilot to a father of three. But as he turns 40 on Tuesday, June 21, 2022, William is making the biggest change yet: assuming an increasingly central role in the royal family as he prepares for his eventual accession to the throne. /PTI] Mumbai, June 20 : Young Indian race driver Jehan Daruvala moves a step closer to realising his dream of becoming a Formula 1 competitor when he gets to test drive with former World Champions McLaren at the Silverstone circuit in England this week. Jehan will drive McLaren's MCL35M car at the Silverstone circuit on Tuesday and Wednesday, becoming only the third Indian after Naraine Karthikeyan and Karun Chandhok to drive a Formula 1 car. "I am really excited at getting this opportunity to test an F1 car. It has been my dream to drive an F1 car and it is a big opportunity for me as very few people get such a chance. I am looking forward to doing my best in the test," said Daruvala, who will continue to be a part of the Red Bull Junior Team which he joined in 2020. The 23-year-old Mumbai-born driver is currently participating in the F2 Championship and has done well so far in the season to be placed third in the overall standings. Though testing an F1 car is no guarantee to getting a regular race drive in Formula 1, it is still a big opportunity for a young driver as he gets a chance to impress teams as they scout for talent for future racing positions. Daruvala said as much during an interaction with select Indian media. "Getting a test is no guarantee of getting a full-fledged drive but it is still a big opportunity for me to learn about the F1 car and to impress teams that will be looking for young drivers for the future," said DAruvala. "I'm incredibly grateful to be getting this opportunity. Testing in Formula 1 is extremely limited and opportunities like these are not easy to come by, especially with a championship-winning team like McLaren. It will be my first experience in a Formula 1 car, which I'm sure will be special. "The support that I have received from the Red Bull Junior Team, my family, and sponsors like Mumbai Falcons, coupled with this opportunity that McLaren have given me will enable me to prepare myself better to achieve my childhood dream of competing in Formula 1," Daruvala said on Monday. About his aim for the two-day test drive, Daruvala said he will initially try to know the F1 car well, learn about driving an F1 car and then try to drive as fast as he can to impress the teams. He has already worked on the simulator for a couple of days to get to know the various switches and to get the experience of an F1 cockpit. Besides, the youngster has also been working on his fitness especially on strengthening his neck region to withstand the extra G-Force a driver experiences while driving a top-notch F1 car. Though Daruvala will be driving the 2021 McLaren car, which is quite different from the current lot in F1, Daruvala said the 2021 car was the fastest in F1 and will serve the purpose of getting the experience of driving an F1 car and learning about it. Daruvala had at the start of the season said that he aimed to get into F1 in the 2023 season. Asked how close he is to realising that dream, he said that though at this moment there seem to be no openings, he hopes to do well in the F2 season and impress the teams for future roles if not now. Asked how did this opportunity come his way, Daruvala said he and his father got in touch with the McLaren team which runs its own programme for young drivers. "We were in discussion regarding an opportunity and that came as McLaren are running their own programme for young drivers." Daruvala said he is not thinking about any other racing series as his sole focus currently is on getting into F1. Asked whether he would prefer a third driver's position over a regular racing seat in some other championships, Daruvala said it's a difficult decision to make at this moment. He said if he sees an opportunity for getting a regular drive in the next season, he would prefer to be the reserve driver with a team. "Jehan has been the leading figure in Indian motorsport for the past 10 years and is just one step away from every Indian's dream of having a competitive Indian driver in Formula 1. Our mission at Mumbai Falcons is to showcase the best of Indian motorsport talent to the world. We are proud supporters of Jehan's 2022 Formula 2 title bid and are just as excited about the testing opportunity being given to him by McLaren," said the Mumbai Falcons, the driving force behind making the motorsport ecosystem in the country more accessible to young Indians. "This is a huge moment for Indian motorsport fans and of course for Jehan himself as working with a prestigious team like McLaren will help him take the next step in his development towards becoming only the 3rd Indian to compete in Formula 1," the Mumbai Falcons said in a release on Monday. /IANS