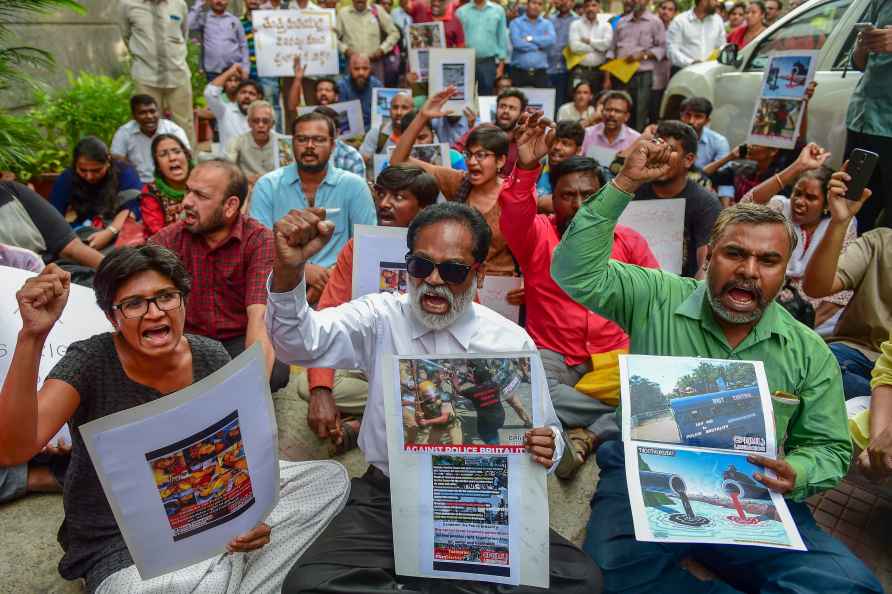 [**EDS: FILE PHOTO** Bengaluru: In this Thursday, May 24, 2018 file photo, activists of New Socialist Alternative stage a protest against the killing of 11 people during Tuticorin Vedanta resources plant and anti-Sterlite violence, in Bengaluru. Vedanta Ltd invites Expression of Interest (EoI) from interested parties to sell its Sterlite Copper unit in Thoothukudi, on Monday, June 20, 2022. ( /PTI] Chennai, June 20 : Vedanta Ltd has decided to put its 4,00,000 ton per annum (tpa) copper smelter plant and refining complex at Tuticorin for sale. The copper smelter plant complex is known as Sterlite Copper. The company along with Axis Capital has called for Expression of Interest (EoI) for its smelter complex (primary and secondary), sulphuric acid plant, copper refinery, continuous copper rod plant, phosphoric acid plant, effluent treatment plant, 160 MW captive power plant, reverse osmosis units, oxygen generation unit and residential complex with amenities. However, an environmental activist, who is against the Copper Smelter plant, wondered whether the company can sell the plant when a case is pending in the Supreme Court. The decision came as a surprise to many as the company was saying that it would reopen the plant. According to Vedanta, the plant produces about 40 per cent of the country's demand for copper and contributes about Rs 2,500 crore per annum to the exchequer and 12 per cent of Tuticorin Port's revenue. Curiously last March, Vedanta came out with an EoI about its decision to set up a 500,000 tpa copper smelter plant in a coastal region in India. The company has sought expression of interest from coastal states wishing to partner in the project that would have an investment potential of about Rs 10,000 crore through a newspaper advertisement. According to Vedanta, the proposed project would need about 1,000 acre in proximity to port along with logistics connectivity with conveyor/corridor of rail and road to handle five million tpa material movement on both in-bound and out-bound sides. The company said the project has a potential to provide direct and indirect employment to 10,000 people and will contribute about Rs 3,000 crore to the government treasury as taxes and others. Senior officials were not available to reply IANS query whether the company is exiting Tuticorin. Later in a statement, the company said India's copper requirements are set to grow exponentially in the coming years. Having ample supplies of copper is critical to ensuring successful implementation of new-gen technologies such as electric vehicles, rapid automated transport and clean energy, the company said. "We are, therefore, actively on the lookout for a suitable partner state to help take forward the vision of an Atmanirbhar Bharat and ensure that our nation enjoys unfettered access to copper, through a state-of-the-art copper manufacturing plant, the operational and environmental parameters of which are comparable to the best in the world," Vedanta said. According to Vedanta, the closure of Tuticorin copper smelter plant has had a ripple effect in terms of imports and livelihoods. "Post closure, India has become a net importer of copper for the first time in 18 years, with copper imports growing 3X while exports have plunged by 90 per cent. We are continuing to explore all legal avenues towards achieving a sustainable solution to the closure," the company had said. The Tamil Nadu government had ordered the copper smelter plant to be shut down in 2018 following a violent protest that led to the death of 13 persons in police firing. The 4,00,000 ton Sterlite Copper smelter plant that has been operating in Tuticorin for over 25 years with a cumulative investment of about Rs 3,000 crore. However, from the start, Sterlite Copper smelter plant has been facing protests by the local people alleging that it pollutes the environment. Originally, the plant was planned in Goa, but it faced severe opposition from the state's people. However, the AIADMK regime under J. Jayalalithaa gave a warm welcome to the project and allotted land at Tuticorin. Ever since then the plant was in the eye of a storm with MDMK leader Vaiko leading a protest against the project and later filing a case. The major political parties in Tamil Nadu -- AIADMK and DMK -- are against Vedanta's copper smelter plant in Tuticorin. The Supreme Court is hearing the case on an appeal filed by the company against the Madras High Court's refusal to reopen the Sterlite Copper smelter plant in Tuticorin. Reacting to the latest advertisement Fatima Babu, one of the persons who had filed a case against Sterlite Copper told IANS: "It has to be seen whether the company can sell the plant when a case is pending in the Supreme Court. There seems to be a hidden agenda in the advertisement as it makes several claims like state-of-the-art plant and others." "Our stand is clear. The copper smelter plant should not be in Tuticorin whether under the name Sterlite Copper owned by Vedanta or by any other owner," she said. She added that if Vedanta wants to set up a new copper smelter then it can do so by complying with the law anywhere else. /IANS

When producer Subaskaran helped actor Karthi & his unit catch a flight in Malaysia!

Chennai, Aug 1 : Pointing out that if a film like 'Ponniyin Selvan' had been made possible today, it was because of producer Subaskaran of Lyca Productions, actor Karthi recalled that the producer had […]