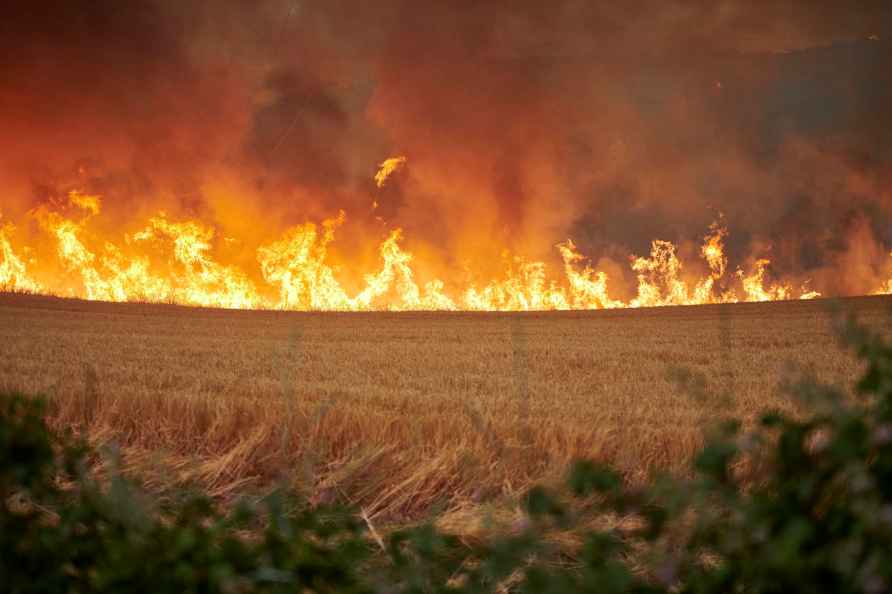 [Flames rage in a field during a fire in Arraiza, northern Spain, Saturday, June 18, 2022. Firefighters in Spain are struggling to contain wildfires in several parts of the country suffering an unusual heat wave for this time of the year. /PTI] Paris, June 19 : As Europe is facing an unusually early and intense heatwave coming from North Africa, governments of many countries have issued warnings and instructions to the public on how to "survive" it. In France, monthly heat records were recorded in several cities, Xinhua news agency quoted local media as saying. According to French daily Le Figaro, an absolute record for the seaside city of Biarritz was recorded at 42.4 degrees Celsius, with an average of 35 degree in other regions in France. A total of 14 French departments were under a heatwave red alert on Friday. About three-quarters of the French population are affected by the orange and red heatwave alert. On Saturday evening, the situation remained extreme, unprecedented, with exceptionally high temperatures never before observed so early in the season, Le Figaro reported. The French government has also set up a "heat" line to help people in need in case of emergency. Across the English Channel, Britain's Met Office has issued a level-three warning, the second highest, for the heatwave in London, southeast and east England, as the temperature rose to 33 degrees Celsius, the highest since summer 2020. The UK Health Security Agency has issued a level-three heat-health alert across London, the southeast and east England, which requires social and healthcare services to target specific actions at high-risk groups. Stephen Dixon, a Met Office spokesperson, told the media that temperatures in the early 30s were "not unprecedented but it is unusual to see temperatures this high this early in the year". "What we've been noticing for the last few years is that even when we get these brief spells of heat, these bursts of heat from the South making our way ... they do tend to be really intense," meteorologist Tomasz Schafernaker told the BBC. "We're going to be pushing the mid-30s, that is something that you are starting to see more frequently, so an indication of that climate perhaps shifting," he said. The heatwave has also swept across Italy this week, sparking emergencies in at least four cities and putting half of the agricultural production in the north at drought risk. An orange heat emergency, the second highest emergency level, was declared in the cities of Brescia, Turin, Florence and Perugia. The most vulnerable, the elderly, children, the chronically ill, and pregnant women are advised to stay indoors. Temperatures in some parts of the north topped 40 degrees Celsius. The agricultural association Agricotori Italiani said as much as half of the agricultural production in northern Italy was now at risk due to drought conditions. In Spain, temperatures reaching 42 degrees Celsius that have put 11 of the country's 17 autonomous communities under an orange alert for high temperatures, continue to fuel a series of wildfires that have destroyed around 13,000 hectares of forest and scrubland over the past three days. Rescue services have reported fires in the communities of Catalonia, Navarra, Aragon and Castile-Leon, while a blaze in the Meseta Iberica in Sierra de la Culebra hills in the province of Zamora has devastated 9,000 hectares. The fire has also led to the evacuation of 650 people from their homes in several small towns, after being started by a lightning strike on June 15. Three further fires in Catalonia have so far destroyed 2,000 hectares, although the Catalan fire brigade warns that high temperatures and strong winds mean these fires have the potential to spread a lot more. Meanwhile, reservoirs in Spain are at an average of 48 per cent capacity, which is 10 per cent down on 2021 and 20 per cent lower than the average for the last 10 years. /IANS