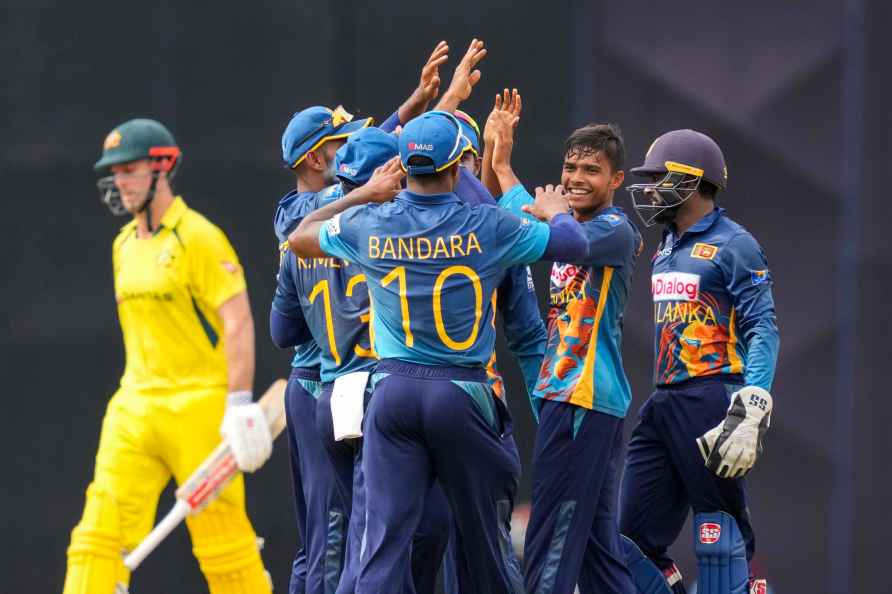 [Colombo: Sri Lanka's Dunith Wellalage, second right, celebrates taking the wicket of Australia's Mitchell Marsh with teammates during the third one-day international cricket match between Australia and Sri Lanka in Colombo, Sri Lanka, Sunday, June 19, 2022. /PTI] Colombo, June 19 : Sri Lanka would be hoping their charismatic spinner Wanindu Hasaranga is fit to guide them in the third One-day International here after the 24-year-old sat out of the home team's 26-run win over Australia in the second game due to a groin complaint. The five-match series against the Aaron Finch-led side is keenly poised at 1-1. While the tourists have several injury concerns ahead of the game, before the second ODI on June 16, Sri Lanka too had to contend with injury to their star tweaker Hasaranga, though he has remained with the team in an attempt to feature later in the series. Sri Lanka know how vital Hasaranga is to their team structure and the medical staff is doing everything they can to ensure he takes the field at R. Premadasa Stadium on later on Sunday. "Wanindu Hasaranga, who suffered a groin muscle strain, while fielding during the first ODI is currently under the supervision of the Team's Medical Team," Sri Lanka Cricket tweeted. "The medical team is assessing his situation and will update the team management on a daily basis about the player's condition. Hence, Hasaranga will continue to remain with the squad during the entirety of the ODI series." Hasaranga scored a quick-fire 37 with the bat and claimed four crucial wickets while bowling with his sore groin in the opening match of the series last week and was also Sri Lanka's leading wicket-taker during the recent T20I series against Australia, which the tourists won 2-1. Sri Lanka all-rounder Chamika Karunaratne knows how important Hasaranga is to his side and believes the 24-year-old could prove the difference if able to return later in the series. "He is one of the best all-rounders in the world," Karunaratne said of Hasaranga. If he comes into the team we will be much stronger and we will have a good opportunity to win a series against Australia. "We have a good batting line-up and it is gelling very well. As players we are pushing our levels to improve with every game individually as well as for the team. "We can make small mistakes but we have to rectify them as we go along. We are pushing ourselves more than 100 per cent to win the series." Australia have their own injury concerns heading into the third match of the series, with a cloud over batting stalwart Steve Smith. Smith hurt his quad while batting during the second match of the series and looks unlikely to be risked for the Colombo clash on Sunday. It could pave the way for all-rounder Mitch Marsh to return from injury, while Cameron Green and Josh Inglis are other options the strong Australian team have at their disposal. Australia have already lost Ashton Agar, Marcus Stoinis and Kane Richardson to injury this tour, while left-arm quick Mitchell Starc is expected to return for Sunday's match. /IANS