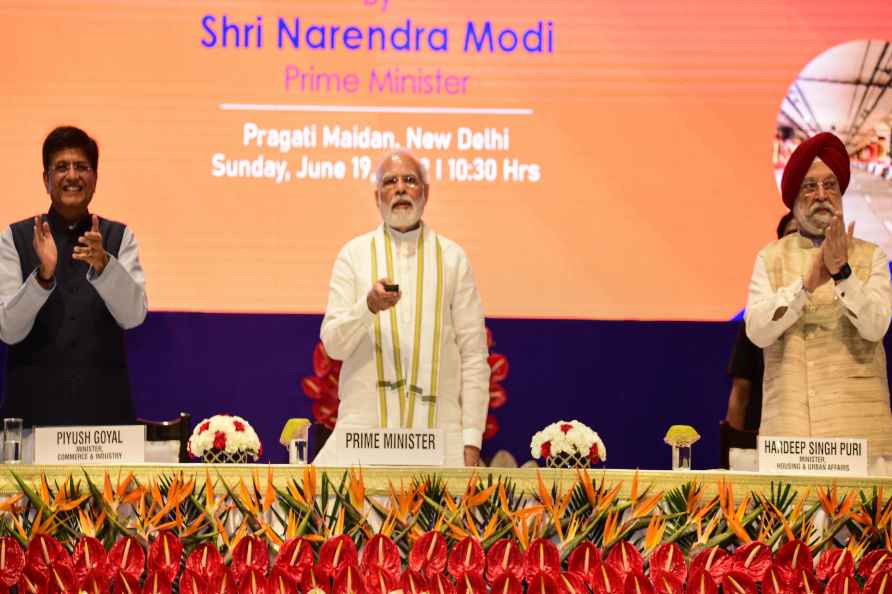 [New Delhi: Prime Minister Narendra Modi dedicates to the nation the main tunnel and five underpasses of Pragati Maidan Integrated Transit Corridor Project, in New Delhi, Sunday, June 19, 2022. Union Minister of Commerce & Industry Piyush Goyal and Union Minister of Housing & Urban Affairs Hardeep Singh Puri are also seen. ( /PTI] By Shashi Bhushan New Delhi, June 19 : Gearing up for next year's Assembly elections in Telangana, which is part of the party's southern expansion plan, Prime Minister Narendra Modi has advised party cadres in the southern state to show their social face along with the political one. The saffron party is working hard to increase its foothold in the southern states of Telangana, Andhra Pradesh, Tamil Nadu and Kerala. The party is in power in Karnataka where Assembly elections will be held in the first half of next year, while Telangana will go to the polls at the end of 2023. Modi will be the face of BJP's campaign against Chief Minister K. Chandrashekar Rao's Telangana Rashtra Samithi (TRS) in Telangana. The Prime Minister has already spoken against dynasty politics in Telangana. Earlier during a meeting of BJP corporators from Greater Hyderabad Municipal Corporation (GHMC) and senior leaders from the state, the Prime Minister, sources said, advised them on how to strengthen the BJP in Telangana, saying that the party's growth is directly linked to their individual growth. "Prime Minister Modi told the corporators that their performance will help them move up the ladder as BJP does not follow dynasty politics. He further said that the party's growth is directly linked to the individual worker's growth. "He advised them to highlight the policies and programmes of the Union government. He also pointed out that the corporators' performance would help in the Assembly and general elections. They must focus on 'Mera Booth, Sabse Mazboot'," a senior party functionary told IANS. It is learnt that during the meeting, Modi told the corporators that they must be the social face of the party. "He (Modi) said that the corporators and others shouldn't only be the party's political face, but they should become its social face as well. He explained that once people get to know you better, they will have a better understanding of the BJP," he said. 'Seva' (service) is also one of the 'mantras' which the Prime Minister gave the party leaders during the meeting. A leader present in the meeting told IANS that service to people differentiates BJP corporators from leaders of other political parties. "The Prime Minister said that the spotlight is always on them as elected representatives, and their work will help further strengthen the party in state," he said. Through the meeting, the BJP sent a strong message that the Prime Minister is connected about the state and its people. "The key message of the meeting was that Telangana is at the centre of attention of the Prime Minister and his government. Another important takeaway of the meeting was that the Prime Minister is easily accessible in comparison to Chief Minister KCR," a party leader said. /IANS