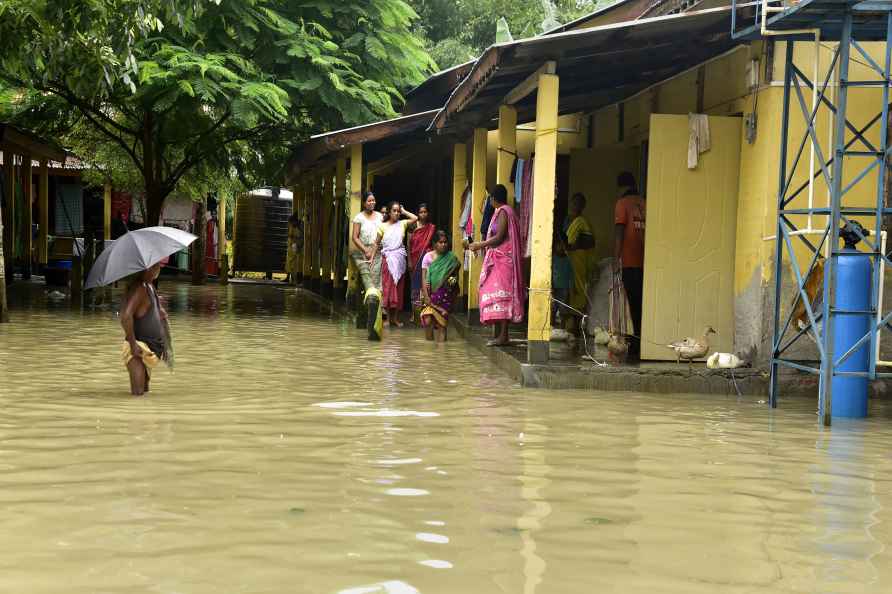 [Nalbari: Villagers at a partially submerged flood relief camp in a flood-affected area after heavy rains, in Nalbari district, Sunday, June 19, 2022. ( /PTI] Guwahati, June 19 : Rain continues to batter Assam on Saturday. As a result, almost ninety per cent area of the state reeling under flood water after pre-monsoon showers wreaked havoc last month only. Landslides triggered by heavy showers have claimed the lives of three people including two children in the state while five others died due to floods. Deaths were reported from Barpeta, Darang, Hailakandi, Karimganj, and Sonitpur districts. Eight persons are also missing from five districts in the state. In Hojai district, a boat carrying flood-affected people has capsized, leaving three children missing while 21 others have been rescued. According to reports, a group of 24 villagers was moving to a safer place from inundated Islampur village late on Friday night when the boat hit submerged a brick kiln and capsized in the Raikota area of the district. Hojai Deputy Commissioner has said that "the search operations are underway to trace the three missing children." Meanwhile, 30,99,762 populations of 4,296 villages in 32 districts of the state have been affected by floods in the last 24 hours, reads the state disaster management authority's report. A total of 1,56,365 inmates have taken shelter in 514 relief camps. /IANS

Hitler too had won elections: Rahul
[New Delhi: Congress leader Rahul Gandhi with party leaders after being detained by police during a protest over price rise, unemployment and GST hike

Cong workers clash with police in Patna, stopped from going to Guv House
[Agartala: Police personnel try to stop Congress workers during their march towards Raj Bhavan as part of party?s nationwide protest over price rise a

New Delhi, Aug 5 : The multi-million Solana crypto hack, that drained more than 8,000 wallets worth around $8 million, has been linked to accounts tied with the Slope mobile wallet app. Slope Fi […]

Los Angeles, Aug 5 : Reality TV star Kim Kardashian and rapper Kanye West are now "very civil" and have "mutual respect" for each other after ending their public feud, claims a new report. A sou […]