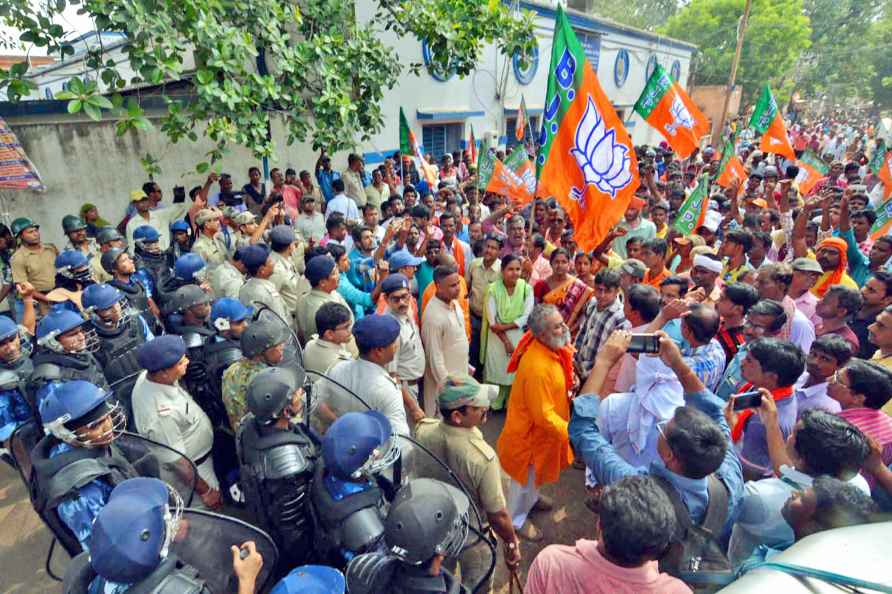 Kolkata, June 18 : A group of agitators protesting against Agnipath, the short-term service scheme for recruitment in the Army proposed by the Union government, on Saturday resorted to a unique way of protest by doing push-ups on railway tracks at Barrackpore railway station in North 24 Parganas district in West Bengal. As a result of the unique protest blocking the railways tracks, several trains were held up outside the station. There was an altercation between the daily railway commuters and the agitators. Some of the commuters also blamed a section of the media for unnecessarily highlighting the protests which encourage the agitators. A huge police contingent reached the spot. First, the police personnel tried to verbally pursue the agitators to stay away from the railway tracks. However, that did not work and the police had to resort to use of force and mild lathi-charge to disperse the crowd. After almost two hours, the blockade was removed and train services resumed. At the industrial township of Durgapur in West Bardhaman district of West Bengal, the supporters of youth and student wings of the CPI-M organised a protest rally demanding immediate cancellation of Agnipath. However, the event was peaceful. The local MP from Barrackpore, Arjun Singh, who has recently joined Trinamool Congress from BJP, said that the Union government has always come out with such anti-people schemes which provoke agitations and common people suffer. "The Union government's aim is to destabilise peace," he added. BJP's state president in West Bengal and party MP, Sukanta Majumdar said that the non-BJP parties are actually misleading the youths and instigating them to resort to such disruptive activities. "I request the agitators to go through the Agnipath scheme and read its plus points," he said. /IANS

Israel to invest $6.13 mn in training Arabs for hi-tech sector
Jerusalem, Aug 11 : Israel has announced the investment of 20 million shekels ($6.13 million) to promote training programmes that will prepare the Ara

Israel to invest $6.13 mn in training Arabs for hi-tech sector

Jerusalem, Aug 11 : Israel has announced the investment of 20 million shekels ($6.13 million) to promote training programmes that will prepare the Arab population for Israel's high-tech sector. […]