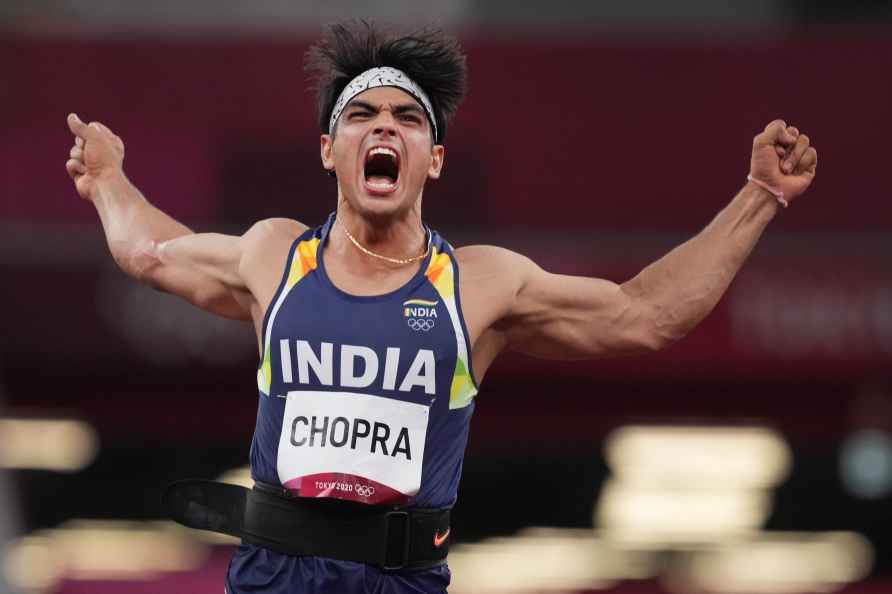 [**EDS: FILE PHOTO** Tokyo: In this Saturday, Aug. 7, 2021 file photo, India's Neeraj Chopra reacts as he competes in the final of the men's javelin throw event at the 2020 Summer Olympics, in Tokyo. Neeraj Chopra won the gold medal with his throw of 86.69 metres at the Kuortane Games 2022, on Saturday, June 18, 2022. ( /PTI] New Delhi, June 18 : Days after winning a silver medal and setting a new national record at the Paavo Nurmi athletics meet, Tokyo Olympics champion Neeraj Chopra on Saturday clinched the men's javelin throw gold at the 2022 Kuortane Games in Finland with an impressive throw of 86.69 metres. Chopra's first throw, measuring 86.69m, was enough for him to clinch the top spot on the podium. However, his winning throw was well short of the 89.30m -- the personal best he had logged during the Paavo Nurmi Games earlier in the week. London 2012 gold medallist Keshorn Walcott of Trinidad and Tobago won the silver with 86.64m while world champion Anderson Peters of Grenada settled for bronze with an 84.75 attempt. The 24-year-old Chopra set the pace of the competition early, taking the lead after the first round of throws with an 86.69m attempt -- 0.05m more than Walcott. He failed to log legitimate attempts with his next two throws and suffered a nasty fall during his third attempt. The Indian was seen wincing in pain right after the fall and didn't take any more attempts after that. Meanwhile, Neeraj's compatriot Sandeep Chaudhary, a Paralympian finished eighth with 60.35m. On the other hand, Oliver Helander, who beat Chopra to win gold at the Paavo Nurmi Games, didn't start the event. Chopra is scheduled to travel to Sweden next for the Stockholm leg of the Diamond League before next month's engagements at the World Athletics Championships in the US and the Commonwealth Games 2022 in Birmingham. /IANS

'Evolving away from tennis': Serena Williams hints at retirement after US Open
[FILE - Serena Williams holds her daughter Alexis Olympia Ohanian Jr., and the ASB trophy after winning her singles finals match against Jessica Pegul

Arun Vijay: Would be great to work with Shraddha Kappor in 'Yaanai' remake

We could have done a lot but couldn't in the final against Australia: Manpreet

By B Shrikant Birmingham, Aug 9 : There is not much a hockey team can do when Australia, the top-ranked side in the world, is on the attack and dominating. But Manpreet Singh, captain of the Indian […]