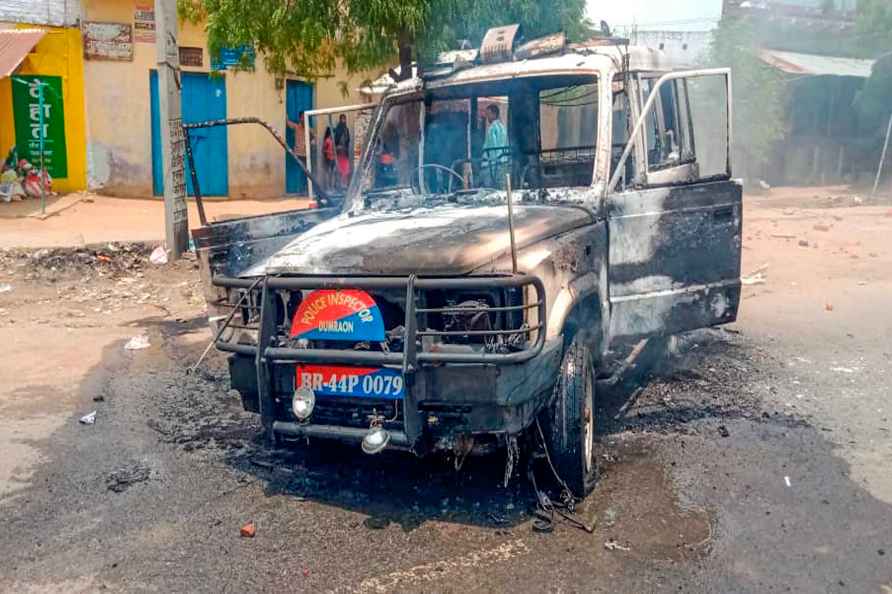 [Buxar: Charred remains of a police vehicle at Dumraon police station, after it was set on fire by protestors during the Bihar Bandh, called to protest against Centre's 'Agnipath' scheme, in Buxar, Saturday, June 18, 2022. ( /PTI] Hyderabad, June 18 : Two Telangana ministers, MP and MLAs on Saturday attended the last rites of the youth killed in police firing at Secunderabad railway station on Friday. M. Rakesh, 22, was cremated in Dabeerpet village in Warangal district amid tight security in view of the protests and the shutdown called by ruling Telangana Rashtra Samithi (TRS). Hundreds of people paid their last respects to the youth, who was an aspirant for an army job. State ministers E. Dayakar Rao, Satyavathi Rathod, MP M. Kavitha, MLAs Vinay Bhaskar, P. Sudershan Reddy and other TRS leaders participated in the funeral procession and paid tributes. Large number of people participated in the procession which earlier began from MGM Hospital in Warangal. It reached Narsampet and from there, the body was brought to the village. Rakesh was killed when railway police opened fire at Secunderabad railway station to control a riotous mob. Tension prevailed during the funeral procession when TRS supporters raised objection to the presence of Congress MLA Seethakka. There was a heated argument between the two groups. The TRS supporters roughed up some of the Congress workers accompanying the MLA. Police intervened to escort the Congress MLA out of the procession. State Congress chief A. Revanth Reddy was also arrested when he was on his way to Warangal district to participate in Rakesh's last rites. Police stopped him at Ghatkesar, evoking strong protest by the Congress leader and his supporters. Revanth Reddy raised objections to the police action. He wanted to know why he was being stopped when TRS leaders were attending the last rites. He alleged that the TRS was doing politics over the body of Rakesh. The police shifted Revanth Reddy to Ghatkesar police station. Later, tension prevailed at the station when Congress workers staged a protest demanding his release and tried to barge into the station. Former minister Konda Surekha also reached there and questioned the police action. There was also mild tension during the funeral procession at Pocham Maidan area of Warangal when some protestors attacked the BSNL office and damaged window panes. Raising slogans against the Central government and Prime Minister Narendra Modi, they set afire the office board and flexis. Police swung into action to control the situation and dispersed the protestors. A shutdown was observed in Narsampet Assembly constituency on a call given by the TRS. Shops, business establishments and educational institutions were closed in the constituency. Rakesh, an army job aspirant, was one of the youth who were protesting at Secunderabad station on Friday against the Central government's armed forces recruitment scheme 'Agnipath'. The protestors went on rampage, setting afire trains, parcel luggage and vandalising the station and the stalls. The youth was killed when the railway police opened fire to control the situation. Rakesh, son of farm workers Kumara Swamy and Poolamma, had the dream of joining the army. According to his family, his elder sister is serving in Border Security Force (BSF). Rakesh took coaching in a Hanamkonda-based institute and cleared physical tests. He was preparing for the written exam and was upset over the repeated postponement of the exam. After the Central government announced the 'Agnipath' scheme, he, like many others, felt that their dreams were shattered. The Telangana government late Friday announced Rs 25 lakh ex-gratia for the family of Rakesh. Chief Minister K. Chandrasekhar Rao, expressing deep shock and grief over the death of Rakesh, announced that in addition to Rs.25 lakh ex-gratia, a government job will be provided to a member of Rakesh's family as per his or her qualification. /IANS

Mumbai: Students make a formation as part of 'Har Ghar Tiranga' campaign, ahead of the Independence Day, in Mumbai, Saturday, Aug. 6, 2022. ( /PTI […]

Chennai: International Master Tania Sachdev during round 8 of the...

Chennai: International Master Tania Sachdev during round 8 of the 44th Chess Olympiad, at Mamallapuram near Chennai, Saturday, Aug. 6, 2022. ( /PTI […]

[Abraham Kibiwot, of Kenya right, leads Avinash Mukund Sable of India competes in the men's 3000 meters steeplechase final during the athletics in the Alexander Stadium at the Commonwealth Games in Bi […]