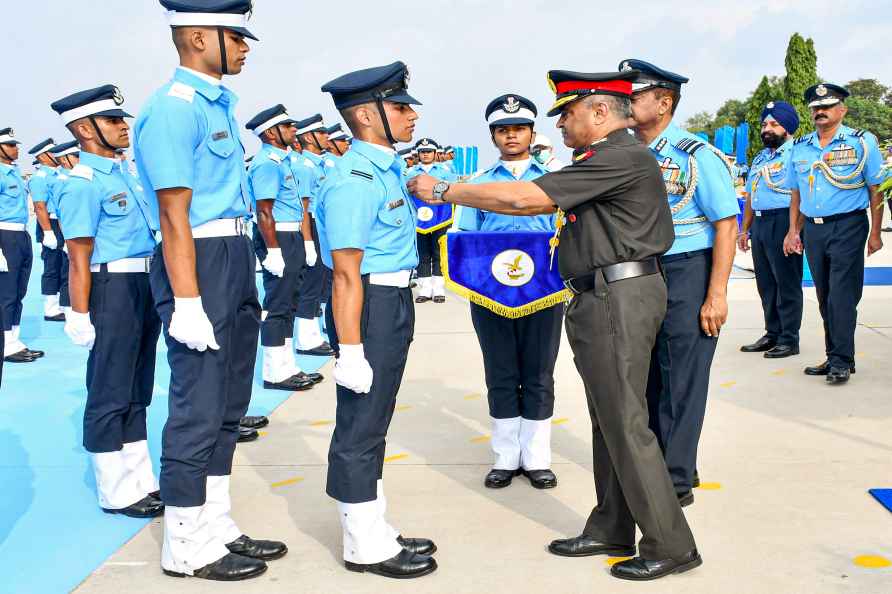 [Hyderabad: Chief of the Army Staff General Manoj Pande presents wings to the newly commissioned officers, during the Combined Graduation Parade at Air Force Academy in Dundigal, near Hyderabad, Saturday, June 18, 2022. ( /PTI] New Delhi, June 18 : Defence Minister Rajnath Singh on Saturday chaired a top-level meeting with service chiefs in Delhi amid massive protests over Agnipath scheme. The crucial meeting of the Defence Minister with the service chiefs was held shortly after the Union Home Ministry on Saturday announced 10 per cent reservation for Agniveers in the recruitment of CAPF and the Assam Rifles. The three service chiefs have reportedly expressed confidence about the scheme through which youngsters will be recruited into the Army, Navy and the Air Force for a period of four years. Army chief General Manoj Pande said the scheme will provide an opportunity to the youth and the ongoing resistance is because they are not properly informed. The Indian Army said a notification will be issued in the next two days while the Indian Air Force announced to begin the recruitment process from June 24. The Indian Navy has said the process will begin very soon. Earliere in a series of tweets, the Home Minister's Office said that "The Ministry of Home Affairs (MHA) decides to reserve 10 per cent vacancies for recruitment in CAPFs and Assam Rifles for Agniveers, completing four years under the Agnipath Scheme announced by the Government of India, led by Prime Minister Narendra Modi". It also said that "The MHA also decides to give 3 years age relaxation beyond the prescribed upper age limit to Agniveers for recruitment in CAPFs & Assam Rifles. Further, for the first batch of Agniveer, the age relaxation will be for 5 years beyond the prescribed upper age limit." Meanwhile, Defence minister Rajnath Singh had on Friday urged the agitating aspirants to start preparing for the recruitment as the process will begin soon. /IANS