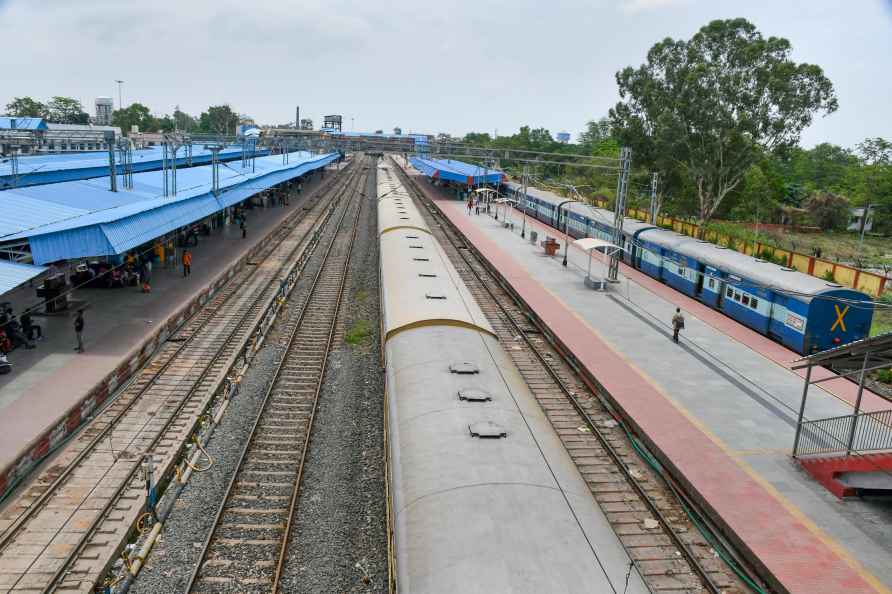 [Ranchi: Trains halt at the Ranchi Railway Station after several trains were cancelled due to a bandh called in protest against the Centre?s Agnipath scheme, in Ranchi, Saturday, June 18, 2021. ( /PTI] Chennai, June 18 : As the protests against Central Government's army recruitment scheme 'Agnipath' saw attack on railway property, the Southern Railway has increased security at all major stations across Tamil Nadu, including Chennai Central, Tiruppur, Coimbatore, Madurai, Salem, Jholarpet, Arkonam. The Tamil Nadu Police have cordoned off the main road in Chennai leading to the Army officers mess and other army installations. Small protests are being witnessed at Kancheepuram and Kumbakonam areas. The Tamil Nadu Police are also on high alert over intelligence inputs that several youth from Jharkhand, Madhya Pradesh, Uttar Pradesh and Bihar are employed in the garment units of Tiruppur. These youths could lead some attacks against railway stations and railway properties in the wake of arson and burning of trains in several northern states, as per the inputs. A youth was killed in police firing at Secunderabad following protests on Friday and therefore, the Tamil Nadu Police and Railway Protection Force are not taking any chances. Riot control vehicles are on standby at major railway stations and the Fire department is also being alerted at all major railway station premises. The trains have been cancelled from Chennai Central railway station due to the Agnipath issue. Tamil Nadu is relatively calm over the Agnipath issue and except for Tiruppur, there have not been any other instance of protests in the state. In Tiruppur, protesters shouted slogans and left without causing any damage to public property. However, security forces are on high alert following intelligence inputs from both the Centre and the state over a possibility of violence spreading to all parts of Tamil Nadu. /IANS

London, Aug 11 : In line with its commitment to the 'Invest in Denmark' initiative, online hospitality major OYO has acquired Europe-based holiday homes operator Bornholmske Feriehuse, which aims to a […]

Overnight funds witness inflows in July after one month pause

By Manish M. Suvarna Mumbai, Aug 11 : Overnight funds category witnessed heavy inflows in July after registering outflows in the previous month. This is because of the rise in overnight rates which […]

Chennai, Aug 11 : The British investments in India that began in early 1,600 CE with the entry of East India Company have continued to grow even 75 years after India gained Independence. Accordi […]