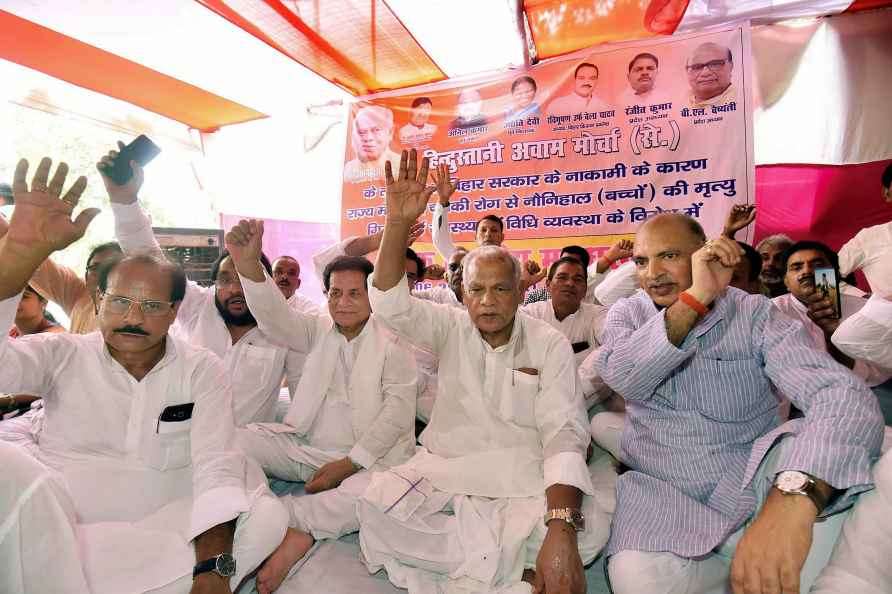 Patna, June 18 : Various parties, like the RJD, the HAM, and the VIP on Friday extended their support to the Bihar Bandh called by different youth organisations of the state on Saturday. The call for a bandh amid violence sweeping Bihar since the last three days and many railway properties being attacked and destroyed on Friday as well. A mob set part of Danapur railway station in Patna district on fire. They have set a car, parked near a fuel station, on fire. Meanwhile RJD national President Lalu Prasad slammed the BJP government at the Centre. "Capitalist government of Narendra Modi is increasing unemployment through anti-youth policies. Is this a government (Narendra Modi Government) formed by contractors who are offering jobs on the contract. Center should withdraw the Agnipath scheme immediately," he said. He also appealed to the youths "to protest in a peaceful and democratic manner". His son and Leader of Opposition in Assembly Tejashwi Yadav said: "If Centre has the justification for Agnipath why they are not recruiting officers on contract basis and why only kawans? The center should clarify whether 90 days leave which a regular army personnel is entitled to is applicable on Agniveers or not." Hindustani Awam Morcha and former Chief Minister Jitan Ram Manjhi also announced support for the Bihar Bandh. "HAM is with youths of the country who are protesting against the Agnipath scheme. HAM does not believe in any kind of violence. We are ideologically supporting the Bihar Bandh on June 18 in the interest of youths and the country," he said. Vikassheel Insaan Party (VIP) President and former minister Mukesh Sahani said: "We have given moral and ideological support to the youths for Bihar Bandh on June 18. There is a great anger among youths of the country against the Agnipath scheme and Narendra Modi government. That's the reason why lakhs of youths hit the streets in the country. The Central government is not stepping back which is a great concern for the country. It is extremely unfortunate." Meanwhile, Deputy Chief Minister Renu Devi, who faced the heat on Friday morning when a large number of youths pelted stones on her house in Bettiah town, said: "The students of the country do not understand the Agnipath scheme properly. Our students cannot do wrongful acts and violence. Those who are involved in violence are the goons of opposition parties who are trying to destabilise the government. Agnipath scheme is related to military training which the Centre wants to give to the youths of the country." Industry Minister Shahnawaz Hussain said: "Confusion about the Agnipath scheme is spreading in the country and some people are creating violence in the shade of youths. Centre has taken historic decisions and every one needs to understand the scheme properly." /IANS

Ayman al-Zawahiri killing: Security at US consulate, Western missions tightened in TN
Chennai, Aug 11 : Security at the US Consulate in Chennai and a Jewish settlement in Dindigul has been intensified on an alert by central intelligence