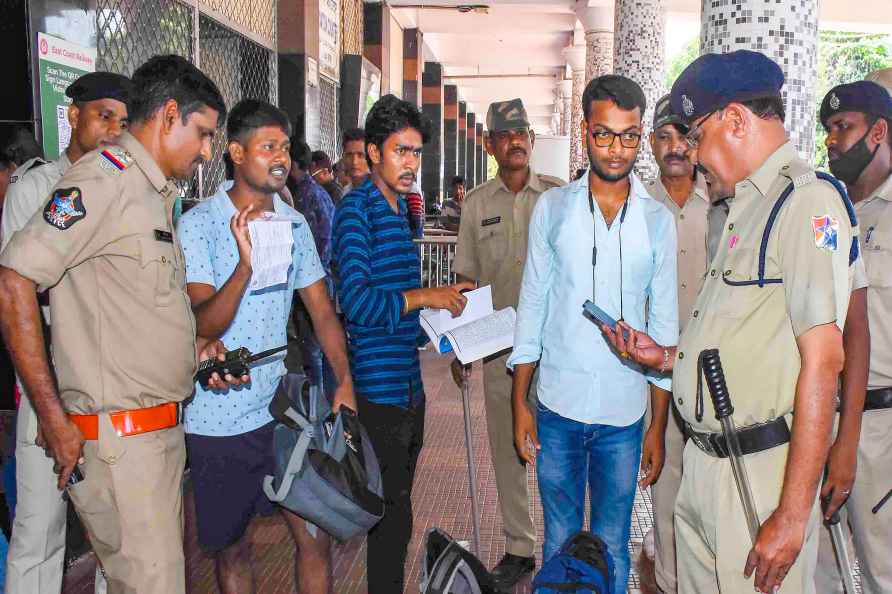 [Visakhapatnam: Railway Protection Force (RPF) personnel inquire passengers after security was beefed up following protests against Centre's 'Agnipath' scheme, at Vishakapatnam railway station, Friday, June 17, 2022. ( /PTI] Bengaluru, June 17 : In the wake of violent protests that have erupted across the country over the 'Agnipath' military recruitment scheme of the Union government, the railway police and the Railway Protection Force (RPF) personnel in Karnataka are on high alert. Security has been tightened at Krantiveera Sangolli Rayanna Railway Station in the central business district of Bengaluru. Similarly, security has also been beefed up at Vishveshwaraya Railway Station in Byappanahalli, Yeshwanthpur, Cantonment Railway stations in Bengaluru. The railway stations in major cities of the state like Hubballi, Mangaluru, Belagavi, Shivamogga, Mysuru have also been put on alert. The RPF has been directed to be prepared in case of protests on railway tracks or rail-roko agitations. The department is keeping a vigil on the movements of passengers as there may be protestors in the guise of travellers. Considering the seriousness of the matter, the authorities have given liberty to officers to take suspicious persons into custody and be on high alert to face any eventuality. So far, no protest or violence has been reported from the state over the Agnipath scheme. /IANS

Washington, Aug 4 : US President Joe Biden is "still experiencing an occasional cough" after he tested positive for Covid-19 in a rebound case, his physician has said. The symptom is less freque […]