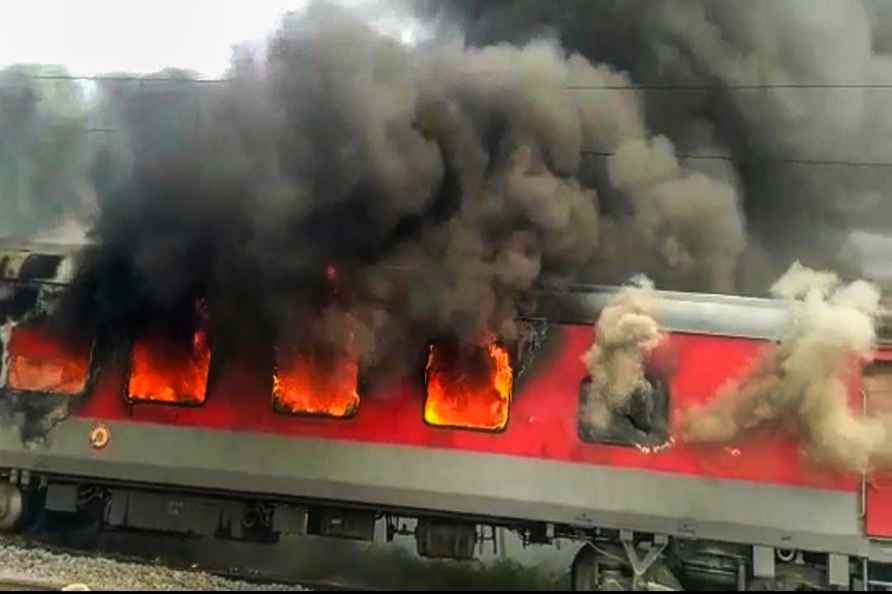 [Lakhisarai: Jammu Tawi Guwahati Express train set on fire by a mob in protest against the Centre's 'Agnipath' scheme, in Hajipur, Friday, June 17, 2022. ( /PTI] Patna, June 17 : Violent protests over the Central government's 'Agnipath' scheme for recruitment in armed forces continued across Bihar on Friday with agitators disrupting rail and road traffic and setting the Bhagalpur-New Delhi Vikramshila Express and Jammu Tawi-Guwahati Express trains on fire. Several organisations have given a 72-hour ultimatum to the Modi government to withdraw the Agnipath scheme or else they will intensify the agitation and call for Bharat Bandh. Raju Yadav, the convener of Army Recruitment personnel Morcha; Manoj Manjil, Left party MLA from the Agiyaon Assembly constituency and national president of INAUS, Sandeep Saurav, MLA of Paliganj and secretary of AISA Bihar unit; Ajit Kushwaha, MLA of Dumraon; Aftab Alam, Vikas Yadav and many others related to AISA (All India Students Association) and INAUS have given the ultimatum to the Central government to withdraw the Agnipath scheme. The agitation by the students and job aspirants continued in almost all the districts of Bihar. In Lakhisarai, the agitating students set the Bhagalpur-New Delhi Vikramshila Express on fire as soon as the train arrived at the platform. The agitated youths asked the passengers to come out from the trains and then set the train afire. In Begusarai, the agitated students set the Lakhminia railway station on fire. They burnt down the ticket booking counter and the waiting area. The office properties and documents were completely gutted in the fire. In Bhojpur, the agitated students set the Bihiya railway station on fire. In Samastipur, the agitators set two coaches of the Jammu Tawi-Guwahati Express on fire in the Mohiuddinnagar railway station located on Hajipur-Barauni railway section. In Khagaria, the agitated mob stopped the Purnea-Ranchi Kosi Express at the Mansi railway station and demanded the rollback of the Agnipath scheme. The students are sitting on tracks at several places in Bihar and they are not ready to go home. Many of them claimed that the Agnipath scheme was suicidal for youths if they join the Army under this scheme. "An army jawan becomes trained in at least a year's time and it takes 5 to 6 years for the jawan to perform duty on the border posts. Under the Agnipath scheme, there is a provision of six months training and deployment anywhere in the country, including on the borders connected to Pakistan and China. Partially skilled jawans cannot survive on the border. It would not only be suicidal for the jawans and also to the entire post," said Raj Kishore Singh, a job aspirant who has been preparing for army examination for the last 5 years. /IANS

By Venkatachari Jagannathan Chennai, Aug 1 : Chess pieces that move on their own as if possessed by some spirit, artistic boards, handcrafted pieces made of camel bones and several other novelties a […]

Biden: 'Justice has been delivered' in US strike killing al-Qaida leader al-Zawahri, 'this terrorist leader is no more', reports AP.

Biden: 'Justice has been delivered' in US strike killing al-Qaida leader al-Zawahri, 'this terrorist leader is no more', reports AP. […]

Mehsana (Gujarat), Aug 1 : Four Gujarati youths were arrested for entering the US illegally last week, sources said on Monday. Following the incident, the Indian Embassy has asked the Mehsana po […]