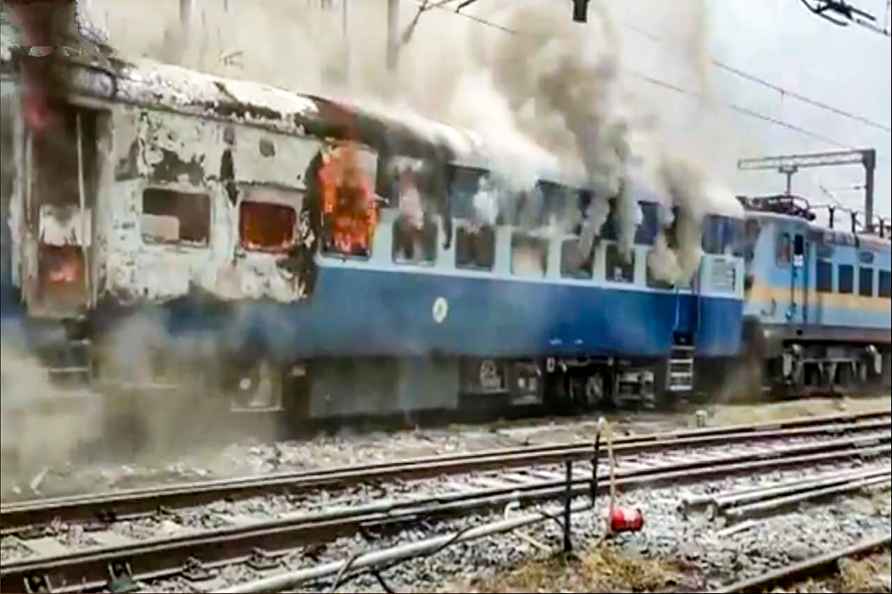 [**EDS: RPT, CORRECTS, DATE**Chapra: Smoke billows out after youngsters set on fire a train in protest against the 'Agnipath' scheme, at Chapra Railway Station, in Saran district, Thursday, June 16, 2022. The government on Tuesday announced the short-term recruitment plan to enlist young citizens into the armed forces. ( /PTI] New Delhi, June 17 : Indian Youth Congress (IYC) on Thursday organised a "Mashaal Juloos" against the Agneepath scheme, which they said is the government's move to mislead the country's youngsters in the name of employment. "Agneepath scheme of the Centre is the 'Vinashpath' scheme for the youth of the country. The 'anti-youth' Modi government is trampling the dreams of youth in the name of 'Agneepath' recruitment scheme," IYC president Srinivas BV said. He said that the Modi government should "stop ignoring the voice of the youth" of the country. "Demonstrations are taking place across the country against the 'Agneepath' recruitment scheme. The Modi government should immediately withdraw the 'Agneepath' recruitment scheme," Srinivas added. The Union Cabinet on Tuesday approved 'Agnipath' recruitment scheme for youth to serve in the Armed Forces. The youth selected under this scheme will be known as 'Agniveers'. About 46,000 of them will be recruited this year. Defence Minister Rajnath Singh has said that the scheme is a "transformative initiative" and under it youngsters will get an opportunity to serve for the Armed Forces. "The scheme will increase employment opportunities and aim to create a youthful profile of the Armed forces," Singh said. However, the scheme, termed as a "historic" measure by the government, has met unprecedented levels of agitations and protests in several states across the country. Massive protests erupted in Bihar, Rajasthan and some other states against the recruitment scheme, over concerns of job security and other issues. However, many states have also announced schemes where such 'Agniveers' -- as the beneficiaries of this move are dubbed -- can get advantage. /IANS

Yangon, Aug 13 : Myanmar will hold its seventh tourism exhibition in its commercial city of Yangon in September, in an effort to revitalise its pandemic-hit tourism industry. The travel fair is […]

Copenhagen, Aug 13 : Applications for permits to explore and store carbon dioxide (CO2), "the first of its kind" in Denmark, will open from August 15 to October 1, said Danish Energy Agency (DEA). […]