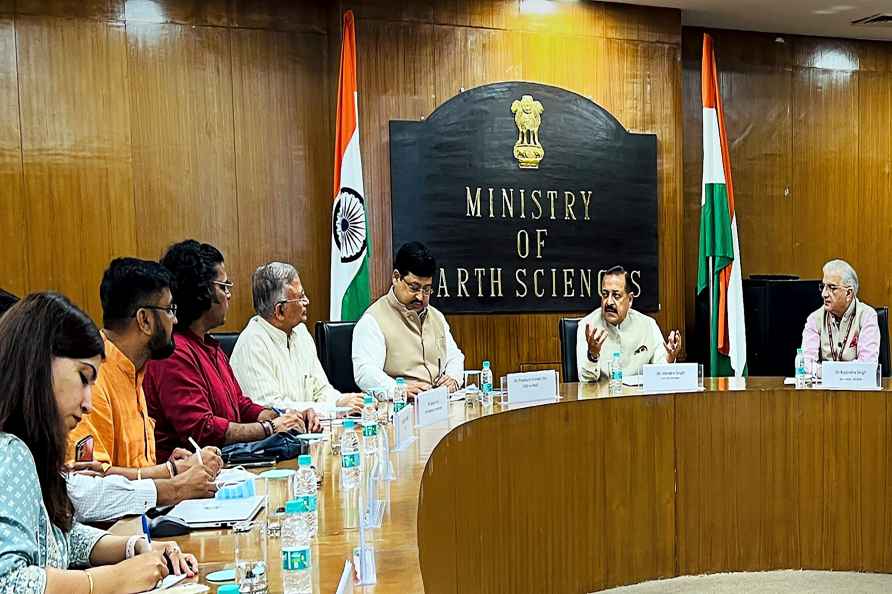 [**EDS: HANDOUT PHOTO MADE AVAILABLE FROM PIB ON THURSDAY, JUNE 16, 2022** New Delhi: Union MoS for Science & Technology and Earth Sciences (I/C), Prime Minister?s Office, Personnel, Public Grievances & Pensions, Atomic Energy and Space Jitendra Singh during a meeting to review preparations for the upcoming 'International Coastal Cleanup Day 2022', in New Delhi. ( /PTI] By Quaid Najmi Mumbai, June 16 : Setting the stage for another confrontation, the Centre has shot down the Maha Vikas Aghadi (MVA) government's proposal for the revamp of the century-old eyesores, British Development Department (BDD) Chawls in Sewri which are situated on Mumbai Port Trust (MbPT) land, officials said on Thursday. The move comes as a bolt for the MVA allies Shiv Sena-Nationalist Congress Party-Congress and the 960 families residing in 12 buildings of BDD Sewri chawls, spread over 5.65 acres of prime realty in south Mumbai. Last April, Sena MP from Mumbai South Arvind Sawant had raised the matter with Prime Minister Narendra Modi, which was sent to the concerned ministry and the MbPT. In a terse reply to Sawant on June 3, Union Minister for Shipping & Ports Sarbananda Sonowal said: "I would like to inform you that a proposal on redevelopment of BDD Chawls at Sewri from Mumbai Port Authority has been examined in the Ministry. At present there are no enabling provisions under any existing policy of the Ministry of Ports, Shipping & Waterways to enact this proposal in its present form." The communication has shocked the Akhil Sewri BDD Chawls Redevelopment Committee who now face an uncertain future even as the work on redeveloping the other BDD Chawls' complexes in Worli, Naigaum and Lower Parel, got underway from August 2021. "We are stunned by the Centre's stand on this critical issue. We have been struggling for a remake of all BDD Chawls for over three decades and now the central government has declined permission for Sewri BDD Chawls revamp," said the Committee spokesperson Mansingh Rane. The tenants, along with the Committee, political leaders and government officials plan to hold discussions on the latest Central missive and how to go ahead in the matter. Rane said the tenants are very upset and will launch agitations to get their "rightful justice" from the Centre to enable them emerge from the miserable existence they are forced to eke out for the past 100 years. Sena's farmer face Kishore Tiwari, accorded a MoS rank, said that this is part of the Centre's attempt to scuttle every public oriented development projects initiated by the MVA government since the past two-and-half years. "Earlier, the Centre had put roadblocks in the Mumbai Metro car-shed proposal in Kanjurmarg, the redevelopment of Dharavi and now the BDD Sewri Chawls. This is highly condemnable and the people of Mumbai will not forget this," said a grim Tiwari. The MVA launched the BDD Chawls redevelopment over 92.86 acres in Worli, Naigaum and Lower Parel, besides Sewri, housing a total of more than 17,000 families in matchbox-type cramped tenements of 160-sq feet each with a common passage, bathing, toilets and washing areas. Despite attempts by IANS, Housing Minister Dr Jitendra Awhad was not available for his reactions or the MVA's future strategy with the unexpected roadblock in the BDD Chawls makeover plans. The BDD Chawls at Worli, Naigaum and Lower Parel are being built by the Tatas, L&T and Shapoorji Pallonji at the different locations that comprise some of the most valuable chunks of real estate in the country. The project envisages well-planned swanky new 40-storied and 22-floor tall towers with adequate parking, wide roads, at least 4 schools, welfare centres, mini-hospitals, gardens, playgrounds and shopping plazas. (Quaid Najmi can be contacted at: q.najmi@ians.in) /IANS

South Africa take commanding first-innings lead vs England in first Test
[London:: South Africa's Anrich Nortje plays a shot off the bowling of England's Ben Stokes during the third day of the test match between England an

[London:: South Africa's Anrich Nortje plays a shot off the bowling of England's Ben Stokes during the third day of the test match between England and South Africa at Lord's cricket ground in London, […]

New Delhi, Aug 18 : Green Hydrogen has become an integral part of Indias economic development and net-zero plans. Hydrogen will act as a critical enabler to achieving the global targets to limit the i […]