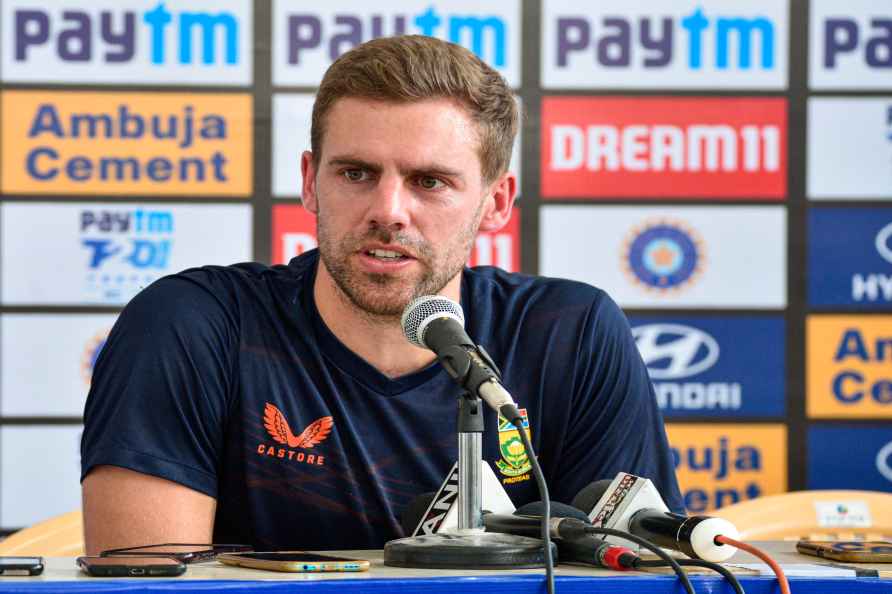 [Rajkot: South Africa cricket team player Anrich Nortje speaks during a press conference ahead of their 4th T20 cricket match of the series against India, in Rajkot, Thursday, June 16, 2022. ( /PTI] Rajkot, June 16 : After a win by 48 runs in Visakhapatnam saved them from conceding the series early, India will be seeking to equalize the series score against South Africa in the five-match affair when both teams take the field at Saurashtra Cricket Association Stadium here on Friday. The match at Visakhapatnam 48 hours ago had everything India needed, with Ruturaj Gaikwad and Ishan Kishan creating a whirlwind 97-run stand to set up Ind'a's base for a challenging 179/5. The bowlers, who were off-colour in the first two matches in New Delhi and Cuttack, came to the party as Harshal Patel and Yuzvendra Chahal took four and three wickets respectively to bowl out South Africa for 131. While hoping to win the match, India would want for captain Rishabh Pant and top-order batter Shreyas Iyer to get some big runs. Pant provided for some thrilling shots in Delhi but a pattern has emerged from his dismissals: -- getting out thrice to balls wide of off-stump and giving catches to fielders in deep on the off-side. With the Proteas bowlers bowling away from his favoured hitting arc, Pant has to find solutions and get back to his best. Iyer has been tested with short-pitched deliveries in all matches and endured a slowdown against facing fast bowlers. But he has been fantastic in dancing down the pitch and smacking Tabraiz Shamsi for sixes. Iyer would be itching to do a change in his playing script on a big ground like Rajkot. With the ball, Chahal and Harshal rose to the occasion while Bhuvneshwar Kumar continued his tidy show and Axar Patel supported well. They would like for pacer Avesh Khan to get some wickets under his belt with the right-arm pacer yet to pick a scalp in the series. On the other side, South Africa will be eager to brush off the Visakhapatnam loss and a rare off day with the bat quickly. The Temba Bavuma-led side found runs from David Miller, Rassie van der Dussen and Heinrich Klaasen in the first two matches before their first loss to India in 2022 hit them. With Quinton de Kock still recuperating from a wrist injury, South Africa may be continuing with Bavuma and his replacement Reeza Hendricks at the top. From a bowling perspective, South Africa have been consistent in pegging India back in the match. But the visitors would like for spinners Tabraiz Shamsi and Keshav Maharaj to have a greater say with the ball as the big boundaries in Rajkot mean spinners will come into play. Overall, it is another must-win situation for India to square the series with South Africa and take the series to a decider in Bengaluru on Sunday. Squads: India: Rishabh Pant (captain, wicketkeeper), Hardik Pandya (vice-captain), Ruturaj Gaikwad, Ishan Kishan (wicketkeeper), Deepak Hooda, Shreyas Iyer, Dinesh Karthik (wicketkeeper), Venkatesh Iyer, Yuzvendra Chahal, Axar Patel, Ravi Bishnoi, Bhuvneshwar Kumar, Harshal Patel, Avesh Khan, Arshdeep Singh and Umran Malik South Africa: Temba Bavuma (captain), Quinton de Kock (wicketkeeper), Reeza Hendricks, Heinrich Klaasen (wicketkeeper), Keshav Maharaj, David Miller, Lungi Ngidi, Anrich Nortje, Wayne Parnell, Dwaine Pretorius, Kagiso Rabada, Tabraiz Shamsi, Rassie van der Dussen, Marco Jansen and Tristan Stubbs. /IANS