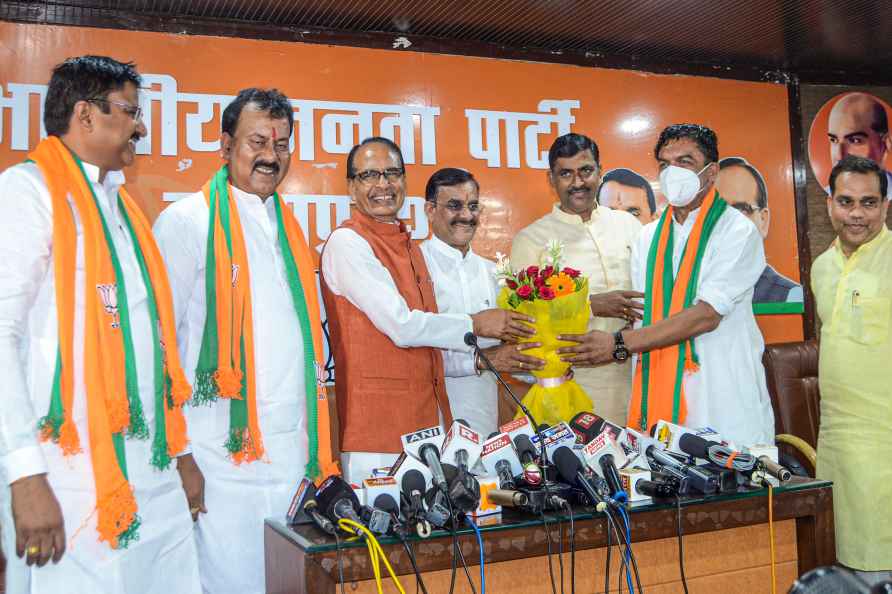 Bhopal, June 14 : Hours after the lone Samajwadi Party (SP) MLA in Madhya Pradesh, Rajesh Shukla, joined the BJP on Tuesday, the SP's state leadership expelled him from the party's primary membership. The Madhya Pradesh unit of SP said that it will also appeal to the state Assembly to terminate Shukla's membership. The state leadership also said that it will discuss the issue with SP's national President Akhilesh Yadav. SP's Madhya Pradesh unit chief Ramayan Patel, while responding to Shukla jumping the ship to BJP, accused the BJP of using money power to lure MLAs from opposition camps into its fold. "Rajesh Shukla has been expelled from SP's primary membership for indulging in anti-party activities and joining hands with the BJP. We will also take action against him after discussing the matter with our top leadership," Patel said. Earlier on Tuesday, Shukla along with a Bahujan Samaj Party (BSP) MLA and an Independent legislator joined the BJP in Bhopal in the presence of Chief Minister Shivraj Singh Chouhan. Shukla was elected from the Bijawar Assembly constituency in Chhatarpur district. With his switch to the saffron party, SP no longer has any legislator in the 230-member Madhya Pradesh Assembly. The two other legislators who joined the saffron camp on Tuesday are Sanjeev Kushwaha (BSP) from Bhind and Rana Vikram Singh, an Independent MLA from Susner. The trio joining the BJP becomes significant as the move came just a month ahead of the Presidential elections scheduled on July 18. The BJP presently has 127 legislators in the state Assembly. /IANS

Italy faces continued population decline
Rome, Sep 23 : Italy's population shrank below 60 million for the first time in years in 2021, and there is no indication of a rebound in the foreseea

Israel, US conclude joint naval drill in Red Sea
Jerusalem, Sep 23 : Israel and the US concluded a joint navy drill in the Red Sea to exercise the use of artificial intelligence during naval combat,

Mumbai: The Vastu Central building where the 'Shiv Sena Bhawan' of Maharashtra Chief Minister Eknath Shinde's faction will be made, at Dadar in Mumbai, Friday, Sept. 23, 2022. ( /PTI […]

Garbine Muguruza of Spain returns a shot against Liudmila Samsonova of Russia during a singles quarterfinal match in the Pan Pacific Open tennis tournament at Ariake Colosseum Friday, Sept. 23, 2022, […]