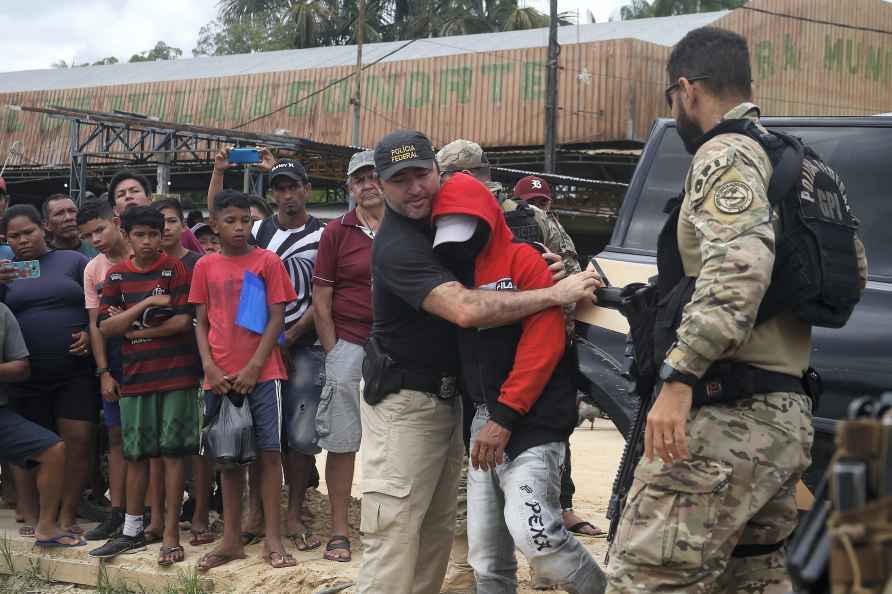 [Atalaia do Norte: A federal police officer escorts a suspect towards a river in the area where Indigenous expert Bruno Pereira and freelance British journalist Dom Phillips disappeared, in Atalaia do Norte, Amazonas state, Brazil, Wednesday, June 15, 2022. Federal police said in a statement Tuesday night that they had arrested a second suspect in connection with the disappearance of Phillips and Pereira in a remote area of the Amazon. /PTI] Los Angeles, June 15 : Two police officers were shot to death while investigating a possible stabbing case in El Monte, a city in Los Angeles County, and the suspect died at the scene. The two officers from the El Monte Police Department were immediately fired upon when they arrived at the Siesta Inn in El Monte, east of Los Angeles, around local time 4:45 p.m. (2345 GMT), said Ben Lowry, El Monte Interim police chief, on Tuesday evening, Xinhua news agency reported. The two officers, a 22-year veteran and a rookie with less than a year in office, were not identified. They confronted the suspect, and there were two exchanges of gunfire, one inside a motel room and a second in the motel parking lot, according to Los Angeles County Sheriff's Department Homicide Bureau. The killings came just one day after a California Highway Patrol officer was shot and critically wounded during a traffic stop in the Studio City area of Los Angeles. /IANS

Israel to invest $6.13 mn in training Arabs for hi-tech sector

Jerusalem, Aug 11 : Israel has announced the investment of 20 million shekels ($6.13 million) to promote training programmes that will prepare the Arab population for Israel's high-tech sector. […]